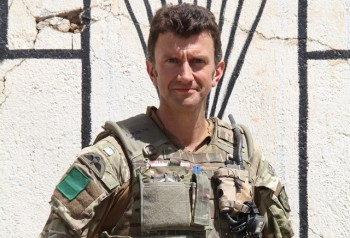 We are proud to announce that the inaugural Award will be presented to Lt Colonel James Coates, OBE, who attended Whitgift School from 1981-88 and was chosen in 2011 by The Daily Telegraph as one of their top ten ‘Britons of the Year’.

James has enjoyed an action-packed and distinguished career in the Parachute Regiment, culminating in his command of the 3rd Para Battallion in Helmand Province.  He introduced a new tactic, subsequently named the “Precision Strike”, combining high level intelligence, CCTV camera surveillance and the use of precision missile attacks.

James has been widely praised for devising and implementing the strategy and it is acknowledged that he set the benchmark in Afghanistan as the exemplar in exploiting the emerging surveillance technology.

James is currently working in the Cabinet Office consulting directly with 10 Downing Street on all matters relating to military strategy and  the deployment of service personnel across the globe.

He is married with a young daughter.

A welcome drink, 3-course dinner and wine is included in your ticket price. Further information will follow shortly.

WA Achievement Awards will be presented from time-to-time when, in the view of the Awards Committee, an outstanding candidate emerges.

The fields for which nominations will be considered:

• Achievement in a chosen career

• Excellence in Sports or The Arts

To make a nomination, in confidence, please send details by email to office@whitgiftianassociation.co.uk or by post to: The Chairman, Whitgiftian Association, Haling Park, South Croydon, CR2 6YT

NOMINATIONS SHOULD INCLUDE THE FOLLOWING INFORMATION:

Alumni may nominate themselves providing that they send two letters of support from independent referees with their nomination. Support letters from members of the nominee’s family will not be accepted.