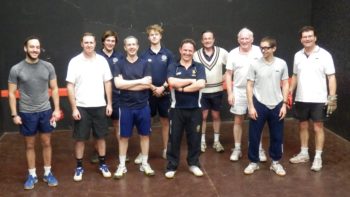 OW5s Club players and supporters ventured westward by road and rail for our annual tour on the weekend of 22-24 March 2019. In keeping with tradition, a number of the touring party met enroute at the Fox & Hounds pub in East Knoyle for Friday lunchtime sustenance.

Following an obligatory post-match drink at Sherborne’s Digby Tap, the party travelled on to Yeovil for curry, drinks, socialising and overnight accommodation.

Players and the supporting entourage travelled further westward on Saturday morning for a more-conventional 4-a-side match at Tiverton. In a very close match, the combined Tiverton & Exeter team proved (just!) too strong for the OWs (Freddie & Graham, Jon & Nick), with the oppo winning by 3 points! (OWs 79 – Tiv/Ex 82)

Post-match refreshments were enjoyed in the beautiful countryside setting of the Butterleigh Inn. Conversation included reminiscing with a member of the oppo who last played against the OWs on tour in the 1980s at the Exeter courts!

The touring party then headed south-eastward to (appropriate-named!) Beer for overnight accommodation. Beautiful coastline, beer, rugby and dinner were enjoyed by all.

Following a leisurely Sunday morning breakfast (and headland stroll for some!), the tourists started homeward. Another great tour was enjoyed by all. Tour results were 1 win, 1 loss – but some players were keen to highlight an overall OW points victory across the 2 matches! Thanks to all who toured, supported, organised and contributed to the weekend.