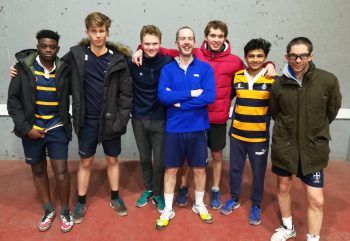 A relatively youthful OW5s team played the current Whitgift schoolboys in March. In a great evening of 5s, the school proved formidable opposition, coming out victorious. It was hugely encouraging to see the schoolboys playing some excellent 5s and thoroughly enjoying themselves; and also great to have recent OWs Sarath Prakash and Alex Armstrong playing their first OWs match, alongside not-so-recent leavers Jonathan Higgins and Nick Woolfenden!

At the time of writing, the OWs are preparing for a later-than-usual South West Tour on the weekend of 27-29 April. A full report will follow for the next newsletter!

We play social 5s regularly on Thursday evenings at the school courts, and players of all standards are very welcome. If you’d like more information, please contact Nick Woolfenden (nickw5s@hotmail.com).