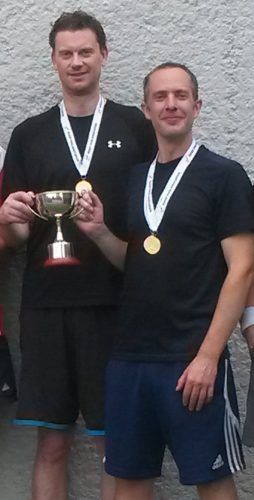 It’s been an enjoyable and successful start to the 2017-18 season for the OW Fives Club. Our team of Tony Hamilton (1963-69), Jonathan Higgins (1986-94) and current schoolboy Cameron Lowe won the plate final at the national ‘Ower’s Trophy’ club tournament in London – much to the delight of visiting OW Anthony Owers (1961-69) after whom the tournament is named.

In other good news, as this article is being written the school courts are being re-roofed, which will help tackle long-standing major leakage problems. We look forward to christening them with a social Fives session with old boys and current schoolboy players, currently planned for Sunday 26th November, and first match of the season vs the national Rugby Fives Association.

Club sessions will restart after the court refurb on Thursday evenings and occasional Sundays. The club always welcomes new or returning players of all standards. If you have fond memories of playing Fives in the past and would like to rekindle that enjoyment on the newly refurbished courts – or have never played and are intrigued to find out more about this great game (most easily described as ‘squash with gloves’!) – please contact Club Secretary Nick (nickw5s@hotmail.com).