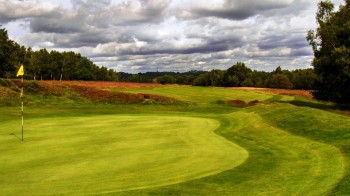 A total of thirteen players took part in the Autumn Tour to Kent and East Sussex at the beginning of October. We played Chart Hills, Littlestone, and Dale Hill on the three days.

The weather was kind to us on two of the three days but at Littlestone we experienced all the hazards of links golf, with high winds and some rain lashing into us on the back nine. Mind you, the very same day, we came across a golfer being photographed in honour of his just having holed-in-one on the 377 yard 11th hole – unfortunately it was not one of our party!

Some good golf was played, in particular by our Captain, Mike Berners Price, and our incoming 2015 Captain, Tony Harris. Tony was a winner on both of the first two days and, in view of his cumulative 11-shot lead going into the last day, suffered a hotly-contested mid-tour cut of four shots to his handicap, imposed by the Captain.

And so, inevitably, it can be recorded that the final outcome after all three rounds was a 3-shot win by none other than Mike Berners Price, repeating his 2013 tour win, with Tony Harris a gallant runner-up who is no doubt plotting vengeance next year. Many thanks should be recorded to John Gould for organising a thoroughly enjoyable tour, now an established feature of OWGS golf.