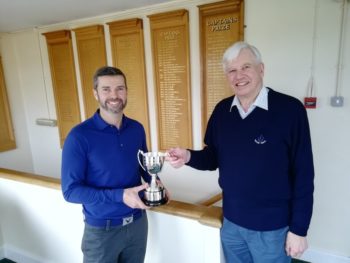 They call it dedication. On Sunday 3rd March, the Scratch Cup was held at Royal Cinque Ports GC, Deal. Storm Freya made an appearance on the same day. A week earlier, and we would have been bathing in the sunshine of the February spring, but this was windy and wet – very windy. Nonetheless all 24 on the start list turned up, and all completed their rounds. This may have had something to do with the fact that they were competing for six places on offer in the 2019 Halford Hewitt team, but it was impressive all the same.

So were many of the scores. There was general agreement beforehand that in the conditions, 80 would be a good score, and that, when playing into the wind, an ability to keep the ball below head height would be an advantage. (For some of us, getting the ball above head height is normally the problem – ed). As it turned out, seven of the 24 scored 80 or better, very good golf in pretty appalling circumstances.

Neill Williams turned in an exceptional score of 72 and, for the second year, was presented with the Scratch Cup by Dudley Thompson (President).

Neill was closely followed by Mark Coppell, making his first appearance, who scored 75, and the remaining four Hewitt places up for grabs went to Harvey Byers (79), Jack Raison (79), Stuart Hollins (80) and Carl Hills (80).

Narrowly missing out on the automatic picks was Matt Webster (80) who lost out on the second stage of countback. Matt had only just returned from a golf trip to Australia, where he had experienced temperatures of 38 degrees; roughly similar to those in Deal, except these were measured in Fahrenheit! Matt had also donated a silver medal trophy for the best score by a player over 50 (ie those qualifying for the senior version of the Hewitt, the Cyril Gray). He is seen below presenting the new trophy to Martin Hayes, who scored 85 and beat five other candidates.

Congratulations to everyone for toughing it out!

A report on the 2019 Halford Hewitt appears separately.