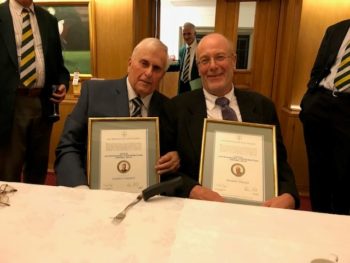 The society held its AGM at the school in March. Alan Blok was duly elected Captain for the next two years, despite encountering opposition of a sort from two members in the front row, both of whom share his surname. 36 attended the ensuing annual dinner, held in the Old Library, where presentations were made to two members who have enjoyed distinguished golf careers in the Halford Hewitt, and indeed made over 100 appearances each in that competition; Gordon Garment and Andrew Stracey (pictured with their awards).

The first Open meeting of the year, Alan Blok’s Captain’s Day at Purley Downs, was held in April, on what turned out to be the warmest day of the year so far. The course was in great condition, and even though the locals were telling us that the greens were comparatively slow, they seemed quick to the rest of us. 29 players turned up, including three schoolboys, Max Stanley, Max Brierley, and Ben Gaunt, continuing our recent practice of inviting some of the boys to join us as guests.

Scoring was generally quite good, particularly amongst Purley Downs members (no surprises there – ed), but the best score of all was by one of our guests, Edmund Binsted, who came along with Charlie Walker and scored 38 points. Since society policy is that only members can win our trophies, the Captain’s Trophy went to David Absalom (pictured below) who was level par for his first six holes and ended with 36 points. Peter Blok and Captain Alan both scored 35 points, and finished second and third, with James Wilde and Don Anderson (both 34) close behind. Well done to all. 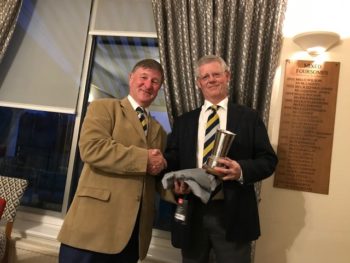 If you wish to participate in our events, and/or join the society, you should contact the secretary at peterbgale@sky.com.