Glorious weather-wise, but mixed in terms of golfing success. Such was the outcome of this year’s Cyril Gray, a knockout tournament for the last 32 schools to enter the Halford Hewitt, competed for by the ‘senior’ golfers of each school (over 50 years of age).

This year’s team (pictured – five of the team making Martin Hayes look about 6’ 7”!) came up against old foes Fettes in the first round, but could not repeat the success achieved against the same opponents in 2018. Whitgift lost 2.5-0.5, but went on to have a decent run in the Plate competition; wins against KES Birmingham and King’s Canterbury were followed by a semi-final defeat to Epsom. 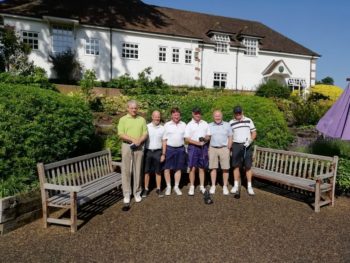 There was an outstanding result however in the Senior Cyril Gray – one round of stableford foursomes where the combined ages of the two participants needs to be 140; Dudley Thompson and Mike Berners Price stormed to a well-deserved victory with 27 points. Bearing in mind this is a scratch competition, that is a great score.

They say great golfers never remember their bad shots. Well, the same appears to apply to the OWGS team which played KCS at Royal Wimbledon in July. Apart from knowing that it was a 5-0 drubbing (“but a couple of matches were close”), your correspondent cannot find anyone who can recall anything reportable about it! No doubt next year will be different; for the first time, we will be the hosts, playing at Croham Hurst.

The society held Dudley Thompson’s President’s Meeting at West Sussex GC, on one of the hottest days of the year. 28 turned out, amongst them Tim Forbes, an all too infrequent visitor to these shores, and new member Bob Justice, who played with the President (pictured).

There was general agreement that the course was superb, but more difficult than most could cope with. The weather took its toll on some, not least Alan Cowing and Dick Shelley, who had to push their failing buggy over the finishing line.

On the whole, the scores reflected the difficulty experienced, which makes it all the more creditable that Ian Chicken took the President’s Prize with 34 points, narrowly beating off David Absalom (34) and Don Anderson (33), both of whom have won at earlier events this season. Many thanks to Dudley, whose last year as President this is, for hosting and for donating a splendid box of wine as the main prize.

If you wish to participate in our events, and/or join the society, you should contact the secretary at peterbgale@sky.com.