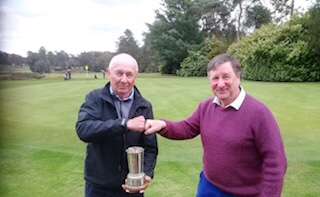 April was generally bright but cold, and so it was for the society’s first open meeting of the new season. The venue was West Hill, one of the renowned Three Ws in the Woking area (the others being Woking GC and Worplesdon GC), and a former haunt of Surrey cricket’s spin twins, the Bedser brothers, who could often be found on the terrace behind the 18th green.

It is a beautiful course, laid in a softly undulating landscape with hundreds of pine trees, perfectly manicured fairways, large and impeccable greens, and just a hint of water amongst acres of heather. But therein lies the ‘Fatal Attraction’ for golfers. For all its seductive charm, the course also carries significant threats to any unsuspecting golfer, namely those very same hundreds of pine trees, water, heather, and greens which were lightning fast. Certainly a number of us suffered at its hands, seeking to extract ourselves from the numerous hazards and, when reaching the supposed security of the putting surface, watching putts that looked certain to finish either in or at the side of the hole, carry on rolling a good five or six feet past, leaving a treacherous return. Alternatively, your reporter witnessed one uphill putt that fell agonisingly short of its target, only to roll slowly and cruelly back towards its maker’s feet. Death by a thousand putts.

Amidst the carnage surrounding them, a few of the 29 starters kept a cool head and negotiated the challenge with very respectable scores. Six reached at least 30 points. Top of the pile, not for the first time, was Don Anderson, who accumulated steadily as he went round and finished with 37 points, to win for the second time the Captain’s Cup (pictured receiving the Cup from Alan Blok, last year’s captain, who hosted the meeting for us after the postponement caused by Covid last year). In second place was Paul Harrup (also pictured), who made a mockery of the difficulties described above, shooting level par for the back nine and scoring 35 points. Roddy Sage, participating in his first event, certainly for many years, also scored 35 and finished third. Well done to all concerned, and many thanks to Alan Blok who organised the day and generously donated the prizes.

Also making its debut at West Hill was the new World Handicap Index, being used for the first time by the society after its introduction late in 2020. Bafflement abounded amongst society members as to how it was that West Hill, with all its attractive menace, has a much lower slope rating (difficulty factor) than many of their own courses, giving them a lower handicap for the day. There are a few wrinkles in the system to be ironed out.

At the society AGM, held online in March because of the current lockdown, Jeremy Stanyard was elected Captain for the next two years, to take over from Alan Blok, whose two years were eventful in a sense that none of us could have anticipated, and John Butler was elected Treasurer, to take over from Nigel Huxtable, who steps down from the committee after an incredible 37 years of work on our behalf. A sincere thank you, Alan and Nigel. Also stepping down and worthy of considerable thanks are Nic Gates, who has captained the Hewitt side for the last five years, and Mike Spanswick, a former President and Captain. Newly elected committee members are Richard Gibson, now Hewitt captain, and three members in, or scarcely out of, their twenties, Joe Marchbank, Toby Kemp and Tom Bloxsome.

Amongst other things, the AGM recommended that the society’s centenary event, postponed from June 2020 because of Covid, should now take place in June 2022 when, one hopes, lockdown and its aftermath will be out of the way.

A full calendar of events for this year is set out in the society’s brand new website, which can be found at oldwhitsgolf.com . Those interested in joining the society can also find out how to do this on the website. And if, as I understand it, this is to be the last WA newsletter, then anyone interested will be able to find news of the society on the website news page. Give us a try!