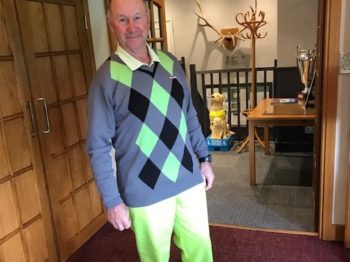 The last issue went to print before I had details of the Autumn Tour, impeccably organised as always by John Gould. I am indebted to John for the following report, but I should warn those of a sensitive disposition that the below contains references to betting, high fashion, and brandies.

“On Sunday, 7th October, 21 OWGS members embarked on the Society’s 8th Autumn Tour. This year the New Forest was the destination with Brokenhurst on the Sunday, Bramshaw Forest (and Manor) Course on the Monday, and Stoneham on the Tuesday. The older hands were pleased to welcome new tourists Jerry Hamley, Tony Fuller and John Grima.

Day 1. An anonymous donation of £150 towards the tour committee was enthusiastically received and put to good use prior to an enjoyable ham, egg and chips followed by a leisurely round of golf. The weather was excellent and although it was known maintenance work was being carried out on the course, the condition of the greens was rather unexpected – they had only just been hollow tined and sanded. Despite this, Alan Longhurst, Peter Blok and Don Anderson tied for first place with a commendable 35 points.

Day 2. On the Forest Course, scoring was again low with Tony Mason and Robert Hollidge both scoring 34 points. Meanwhile, due to no buggies on the Forest Course, Fuller and Gould played the Manor Course and Gould posted an unexpected 37 points. The only person to have bet on Gould was Gould himself, so he scooped the jackpot!

Finally, day 3 at Stoneham and the best weather on the tour; good enough for several tourists to play in shorts. Hollidge had another fine day and scored 41 points with Tony Mason coming second with 38 points.

Overall, Hollidge was the winner of the Eclectic and Brandies (Brodies and Andrews) won the house cup with Hollidge being the major contributor.

For sartorial excellence, no one was a match for Peter Blok – purple trousers on day 1, green trousers day 2, and pink shorts on day 3! Alan Scovell also introduced a new tour award for “Alan of the Day”; congratulations to Alan Blok for winning on two of the three days.

My thanks go to Alan Scovell for his bewildering spreadsheet which somehow managed to produce the results; Don Anderson for looking after the betting; Tony Harris for managing finance, aided and abetted by Nigel Huxtable who managed to keep tabs on all the monetary comings and goings.

The ninth Autumn Tour will be Sunday, 6th – Tuesday, 8th October 2019 and will take place in Suffolk. We are hoping to play Woodbridge, Ipswich and Felixstowe Ferry and will be staying at the White Lion Hotel in Aldeburgh. More news to follow.”

The only other outstanding matter from the 2018 season is the outcome of the individual knockout competition, The Challenge Cup. This was won by Howard Beeston, who overcame Peter Kelley at the chosen neutral venue for the final, Tandridge.

The 2019 society calendar has now been published; the AGM and annual dinner will take place at the school on Monday 11th March, and our four ‘open to all’ meetings will be at Purley Downs (18th April); West Hill (23rd May); West Sussex (24th July); and Betchworth Park (29th August). Dates for your brand new diaries!