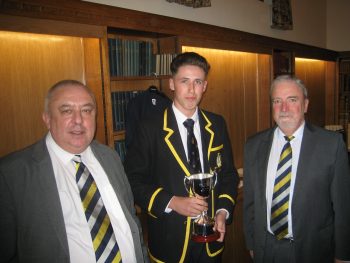 The golf society held its AGM and annual dinner on Monday 13th March, well attended by 42 people including guests, all of whom were splendidly entertained by two of the school’s leading musicians and by the Headmaster, who spoke to us after the meal and reminded us that success, whether in music, sport or academia, only comes with dedication and hard work.

The hard work has only just begun for the newly elected Captain, John Butler OW (1962-68), who replaces Tony Harris OW (1964-72), and President, Dudley Thompson OW (1953-59), who steps into the role vacated after three years by Mike Wilkinson OW (1953-61). Both Tony and Mike were thanked wholeheartedly for their efforts on the society’s behalf.

The dinner also included presentation of a new cup donated to the society by Charlie Walker OW (1975-80) in memory of his late father. Dubbed the Walker Cup for obvious reasons, the cup will be awarded each year to a school golfer ‘for achievement in the sport’; this year’s winner is Harvey Byers, who was an integral part of the school team that won the HMC Foursomes in 2015 and represented England U16s. In 2016, he progressed further in Open Qualifying than any other Junior.

The only playing news this time around is to record Whitgift’s performance in the 2017 Halford Hewitt. The team, led by Nic Gates OW (1984-91), successfully overcame Chigwell in the first round but disappointingly succumbed to St Paul’s in the second round.

The society’s first open competition this year is the Captain’s Day meeting on 11th May, when John Butler will be taking us to Langley Park, near Beckenham. All members are welcome.

Anyone wishing to join the society should contact the secretary at peterbgale@sky.com.