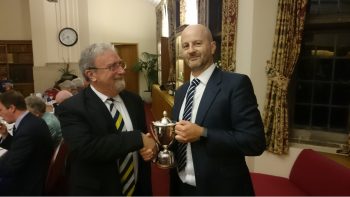 The society held its annual dinner on 12th March, attended by 28 members as well as Jonathan Bunn, Chairman of the WA, who gave an informative and amusing speech after the dinner. The dinner was preceded by the society’s AGM, at which Alan Blok was elected as Vice Captain. Alan will be nominated as Captain at the 2019 AGM, and if elected will serve as Captain throughout 2019 and 2020.

The first event of the season was a new one, the Scratch Cup, essentially a trial for the Hewitt team, played off scratch at Royal Cinque Ports GC, Deal in early March. The winner of this inaugural competition was Neill Williams, who managed a creditable score of 76 in extremely cold and windy conditions.

Unfortunately, Neill was unable to play in the Hewitt team’s first round match against Downside, in early April. His presence was clearly missed, as we allowed a lead in four matches after nine holes to disappear in the closing stages, and went out 3-2, with the deciding action taking place on the first extra hole of the fifth match. This was the first time since 2011 that we have failed to get through the first round. Some honour was restored however by good wins against Wellingborough, Forest and Loretto in the Plate competition, before a semi-final exit against Edinburgh.

The society held John Butler’s Captain’s Day meeting at Kingswood in mid April, the first open meeting of the season. 31 players, including three boys from the school, turned out on what was the hottest April day for 70 years; Kingswood is long and tough at the best of times! Many players struggled to get past 20 points, which puts into clear perspective the achievement of Jeremy Stanyard in compiling 35 points to win the Captain’s Trophy. Don Anderson (32) and Nigel Bradley (31) followed in second and third places respectively. Our three guests from the school outshone virtually all the opposition, and comfortably matched the scores of the top three members. All 13 years old, Ollie Stanley, playing off 10, Rocky Chapman, 5, and Nyal Patel, 17, were excellent examples of the golfing talent being produced at Whitgift. Many thanks to Simon Beck for bringing the boys along, and also to Harry Plowman-Ollington, who received the OWGS’ Walker Cup, presented for outstanding achievement in school golf. Harry told us about some of the school golf team’s notable performances, and about his own plans for scholarship golf in the US. Remember to come back for the Hewitt, Harry!

The next open meeting is at Banstead Downs, on 23rd May. Why not come and join us?