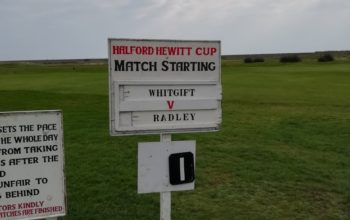 Deal can be a delightful place to play golf, or indeed to watch it. It can also be very cold! It was the latter in early April, when the annual pilgrimage for the 64 schools who make up The Public Schools Golfing Society took place, in competition for the Halford Hewitt Cup.

Whitgift began with renewed confidence, having probably the strongest team we have fielded for many years, estimated to have a total handicap of 4 (aided considerably by the arrival of Harvey Byers at +3, fresh from his triumph in Rye’s ‘Darwin Salver’ – a very prestigious amateur event for those under 21). There were three other newcomers – Mark Coppell, Toby Kemp, and Jack Raison.

The first round match against Shrewsbury always looked under control, with the strongest pairs at the front of the field never in great danger, the team therefore only needing one win from of the last three pairs in order to win the tie. In the event, Matt Webster and Toby Kemp, at 3, ran away with their match after the turn, and emerged 6&5 winners, leaving the ‘dead’ matches declared halves and Whitgift victorious 4-1.

The second day was no warmer for the match against Radley, finalists in 2016. Early on, a similar pattern seemed to be emerging to that on day 1, with the front two pairs ahead, and the last three facing closer matches. Harvey Byers and Carl Hills, at 2, were never seriously pushed, and indeed the impression formed that Radley had chosen to put one or two of their stronger pairs further back (which they are perfectly entitled to do); their third pair holed three long putts before the turn, and eventually won convincingly. Joe Marchbank, with Tom Bloxsome at 5, looked the most likely to claim the vital third point that Whitgift needed, especially after a spectacular 245 yard 3-wood to the seventh hole from the left hand rough, which finished 15 feet away. Marchbank/Bloxsome went on to win 2&1.

But just as the fifth pair nudged ahead, things started to look more dangerous up front. Radley’s top pair started what turned out to be a level-par back nine, and turned a 2-hole deficit into a one-up lead by the 14th. At the 17th, still one down, Mark Coppell, playing with Neill Williams, hit a great approach to the green which finished virtually adjacent to the hole, a birdie which seemed certain to level the match, only for Radley to hole from distance to snatch a half. And so, with the score 2-1 in Whitgift’s favour, our first and third pairs went to the final hole, both one down. Both scored par 4s, but it wasn’t enough; Radley’s third pair were off the green but got up and down to win the tie 3-2, a testament to the old adage “putt for dough”.

Talking of adages, the remainder of the competition illustrated the truth of one or two of them …

“What goes around comes around”. Radley’s next opponents were Charterhouse, and they suffered the same narrow defeat, 3-2. On this occasion, Charterhouse won the deciding match at the 20th hole, holing a 200-yard 3 iron!

“It ain’t over till it’s over”. Malvern were 2-0 down in their third round match against Rugby, needing to win all three remaining matches to get through. Surely not; not when your fourth pair is 3-down with three to play? Yes, they did. Rugby put their drive on the beach at the third extra hole. Malvern went on to win the Hewitt, on the fifth extra hole in the deciding match of the final!

But forget “third time lucky”. Malvern’s opponents in that final were Ampleforth, already losing finalists in both 2017 and 2018.