Royal Ashdown in the Sun 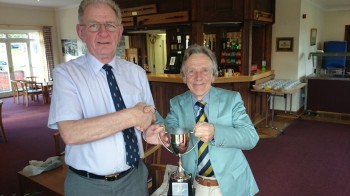 Royal Ashdown in the sun, with the West course greens in fabulous condition but as difficult to negotiate as ever; it provided a great setting for our last major outing of the season. 26 took part (including Tim Forbes, who was visiting from NZ) and enjoyed not only the good weather but also Ashdown’s excellent catering.

The golf itself was preceded by an interesting little excursion to the club’s simulator, where everyone had the chance to enter a ‘nearest the pin’ competition, playing the famous ‘Postage Stamp’ at Troon. Robert Hollidge finished 10 foot away with a ‘thinned’ 11-wood and took the honours! Robert made good use of his full set of woods (irons are SO last year!) out on the course too, finishing with 36 points and the Autumn Cup. This is his second triumph in the society’s four meetings this year which, if you will allow the comparison, puts him somewhere near level terms with Jordan Speith. The Hollidge Slam in 2016, maybe? Paul Harrup (34 pts) and Nick Matthews (33) took second and third places respectively.”