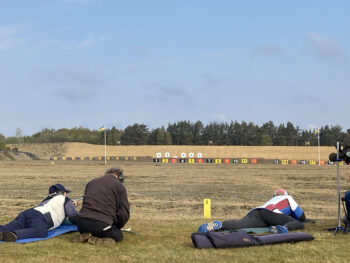 Well here we are, our last issue. It’s times like these I wonder what my predecessor, Alan Hunter, would have thought of the current circumstances with Covid, the changes at the school and within the WA. This year, as I mentioned in the last issue, marks 125 years from the formation of the Whitgift Veterans Rifle Club, and not only that but those particularly astute will have noticed that this year also marks the 425th anniversary of Whitgift School! I’m immensely proud to not only be an Old Whitgiftian but being in a position to write about a club that is one of the oldest school shooting clubs in the country, and a founding member of the Ashburton Shield among other competitions.

So far this year, we’ve been very lucky to have already begun shooting at Bisley, competing in the London and Middlesex Rifle Association Public School’s Veterans match, fielding 2 teams, however unfortunately not placing in the top 3 despite incredible shots by our A Team (Doug Stewart, Guy Hart, Nick Harman and Maxim Gennari) all of whom shot over 145/150.

It goes to show that even after a year of no shooting, the skills remain the same. We then were lucky enough to all have lunch together thanks to the hospitality of the LMRA.

Looking slightly further back than last weekend, in March we had our AGM, and said thank you to our outgoing secretary Guy Riches OW (1980-88), who has been in post for the second time, for 5 years, and we welcome myself to the post of Honorary Secretary for the next 5 years! Our deepest wishes of thanks go to Guy for his dedication and service over the past few years, especially during the difficulty that Covid-19 has caused us.

It’s with great excitement that we can announce we will be recommencing shooting on the 18th of May at the school range, at 19:00 as usual, and we look forward to the gradual relaxing of restrictions that will mean we can once again go for evening meals and beers after shooting!

I wanted to take this moment, our last in this format, to reflect on the past many years of shooting. I had a brief delve into the depths of the WA’s archive to drudge up a few articles from 2012 (the earliest online) only to find the regular writings of Alan reminding me of how far we’ve come in the last 10 years, as well as how lucky we are.

We are well supported as always by the school and the WA, and are lucky enough to have a steady flow of new members to the club, keeping us fresh and active! We have, on the range, a score card from 90 years ago, the first shots ever fired on the new range at the then recently moved Whitgift School, signed by none other than a Furtado, the uncle I believe of our own Jack Furtado OW (1951-56) who was shooting with us last weekend, with a very respectable score in our Veterans Match.

I’m looking forward to welcoming as many of you as possible who’ve shot with us in the past, and who may shoot with us in the future for some of our anniversary events which we are planning for later this year when we can.

If you’re interested in attending or being involved, or even getting back into shooting/starting your shooting career, you can always find me via secretary@wvrc.org.uk. We now have social media too, so please find us on Facebook and Instagram. This then is farewell, but I hope you will hear from me again soon, the final thing to do is wish you all a wonderful day, and I hope to see you soon.