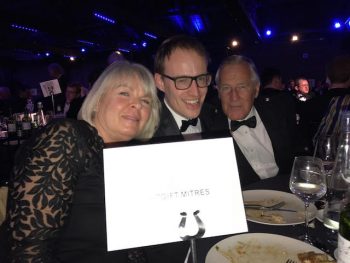 An excellent evening of cricketing reminiscence was held at the Brewery in Chiswell Street on 27 April to celebrate the 50th Anniversary of the Cricketer Cup competition for 32 of this country’s leading schools’ old boys sides.

Speeches were made by the Chairman, Anthony Monteuuis (Old Tonbridgians), Competition Sponsor, Alan Lorenz of Herbalife (Charterhouse Friars) and principal guest Jonny Barclay (Eton Ramblers). Barclay, a former President of MCC and captain of Sussex is now running the Arundel Castle Cricket Foundation and regaled the audience with amusing tales from his career and Imran Khan’s reverse swing ability!

The Final of this year’s competition is being held at Arundel on Sunday 6 August.