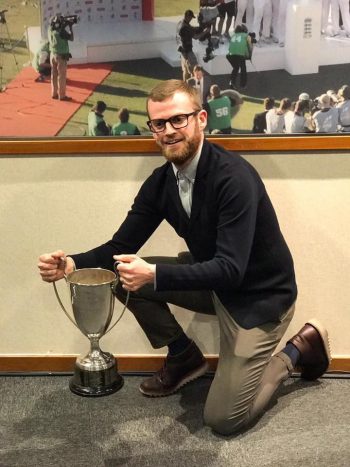 In my last report, I was revelling in telling you all about our first XI’s league title win of South Division 3 of the amateur football combination. It’s currently the off-season and we are yet to start our current campaign which kicks off in mid-September, but we are looking forward to trying to repeat it all again in South Division 2! We have however now received our trophy at a well-attended ceremony at the Oval Cricket Ground handed to us by non-other than Crystal Palace legend John Salako. It was a great evening, and John even joined the lads in some victorious football chanting latter in the evening much to our delight.

The second XI also finished the season well, reaching the semi-finals of the Spring Cup before taking the eventual winners the Civil Service all the way to extra time before narrowly losing 2-1. We did excellently just getting that far. We had defeated City of London just to get there and they had won our division with ease.

Preparations for the coming season have been going well; we have been training since mid-July and had one friendly already against the King’s Old Boys 2nd team who will be in our first XI’s league this season. It was a thrilling 4-4 draw, a result we were very happy with because our side only featured three first XI regulars and made all the more impressive by playing with only ten men for the first half hour due to a couple of late arrivals. We somehow led 3-1 whilst playing with ten men with Max Kirchner OW (2002-10) brilliantly returning from long term injury scoring a hat trick on the counter attack. Despite later playing with eleven men, fatigue set in and we eventually allowed King’s back into the game, nearly holding on to victory but for a penalty in the final five minutes.

Max has also taken over running our first XI alongside co-manager Sean Bartlett, taking over from Bill Biss who will be focusing purely on his goalkeeping for the coming season. It is great to have Old Whits Sean and Max running the side, both of whom had experience playing in the school’s first XI.

If you or any of your friends are interested in joining please email oldwhits@gmail.com for more information.