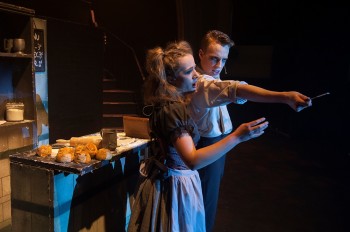 Almost exactly one year to the day that Dr Barnett announced his retirement, the identity of his successor has been revealed…  read more on the adjacent page. Needless to say, we are pleased to hear of his appointment.

This year’s major school production was the Stephen Sondheim musical, Sweeney Todd. This story of a vengeful barber who, in cahoots with a down-and-out pie shop owner, slices and dices his way through a colourful collection of Londoners and turns them into tasty savoury treats, is not as well-known as some of the recent hits that the school has put on and, as such, there was some doubt as to how it would be received by the sell-out audiences. This played upon the actors’ and director’s nerves; indeed, in the final moments leading up to the opening curtain, you could cut the tension with a razor! They need not have worried, however: the two leads – Alex Buchanan, as the twisted barber, Sweeney Todd, and Croydon High’s Blanche Brown, as his blood-thirsty co-conspirator, Mrs Lovett – gave sharp, focussed performances, and their pointed, incisive interplay was something to behold! They were supported by a stellar supporting cast and a 40-piece orchestra! Not one to mince her words, Head of Drama, Mrs Miranda Merrett, was full of praise, “Sondheim’s production is a complex and intricate work of art, and doing it justice was therefore a considerable challenge – yet these very talented students have truly mastered the difficult music and brilliantly-eccentric characters. I am incredibly proud of their professionalism and outstanding achievement.”

The school’s Remembering 1916 – Life on the Western Front Exhibition has now been up and running for a few weeks and it has received a great deal of both critical and public admiration. It opened on Thursday 12th March and the occasion was marked by a magnificent launch event. The Mayor of Croydon, Ambassadors, Foundation Governors, contributors, collectors, historians, museum directors, members of the press and friends of Whitgift joined those who worked on the Exhibition for this special occasion. Guests were invited to tour the Exhibition, enjoying an interlude midway of Edwardian music and song in the authentic ‘Home from the Front’ 1916 drawing room. Guest of Honour, Professor Margaret MacMillan, opened the event in the Concert Hall with a warm and thought-provoking speech, kindly declaring it a ‘truly wonderful exhibition’.  An Opening Concert followed, with the school’s elite musicians (both pupils and staff) performing a wonderful programme of pieces from the period, including Elgar’s ‘Cello Concerto in E minor, Op. 85′, Butterworth’s ‘Loveliest of Trees’ as well as some more lively songs, such as Somewhere in France and ‘If You Were the Only Girl in the World’. The music was interspersed with moving readings (in English, French and German) by members of staff, and current and past pupils, giving the audience an insight into that harrowing and sad period, through ‘distant voices’. The finale of the show, ‘Goodbye-ee’, by Weston and Lee, complete with a highly-entertaining accompaniment of boys and staff in period costume, was a fitting pinnacle of the night. Since the opening, the Exhibition has been lauded by, amongst others, the BBC, The Sunday Telegraph and the Londonist website, which gave it a 5 star review.

In sports news, the hockey season finished on a high, with the U14 and First elevens both winning through to their respective National Outdoor finals. In football, both the U12 and U13 sides have reached the final of the English Schools’ Football Association Cup. This is an incredible achievement, as the competition is open to every school in the country, not just the independent ones.

In fives, Whitgift achieved some fantastic results in the National Championships, on 4 April, which had over 110 entries from 17 different schools. Six players represented Whitgift in the top 16 semi-finalists in both the Colts and Senior competitions (more than any other school), with Upper Fifth Form pupils, Cameron Low and Sarath Prakash, reaching the U16 finals. Congratulations should go to the Lower Fifth Form table tennis players – James Smith, Reiss Vydelingum, Jason Kwok and Isaac Fung – who competed in the ESTTA Team Regional Finals, in Bristol, on 19-20 March. Their fantastic performance in the U16 category has earned them a place at the ESTTA Team National Finals, on Saturday 16 April, in Hinckley.

Next, onto fencing: Whitgift took part in the annual Public Schools’ Fencing Championships, held at the Crystal Palace National Sports Centre, between 15 – 17 March. The tournament is the largest competition in Britain, with 98 schools and 1,280 fencers competing this year. Highlights of the championship included Upper Fifth Form pupil, Connor Head, achieving 1st place in the U16 Foil – last won by a Whitgiftian in 1989 – and being crowned U16 Master at Arms (overall winner across all three weapons), and Upper Third Former, Malvin Lingajothy, coming in at 2nd place and earning the title of U14 Master at Arms. Whitgift came 3rd place overall in the team trophies. Last, but not least, the U19 Squash team have been crowned national champions, winning the event at the National Centre for Squash in Nottingham on 7 March. So that’s just your typical two month period in the Whitgift sporting calendar!

In my last report, I commented how the school was branching out in the variety of sports it was offering to the boys. Well, I can now say the same with regards to other competitive events. Pupils from the Upper Fifth and Lower Sixth Forms – Kelvin Zhang, Aleksandr Vorontsov, Jack Barber, Alistair Cook and Freddie Rawlins – attended a 24-hour computer coding competition, hosted by tech start-up Qredo, their second ‘hackathon’ as a Whitgift team. The boys stayed up well into the night to work on their entry and were duly rewarded by coming joint first and receiving a £500 prize.

So, what will Dr Barnett’s final year at the school hold in store? Intrigued by this prospect, I decided to dig into my collection of Old Whitgiftian magazines to check out the Summer 1991 version and see what the highlights of Mr Raeburn’s final year were. The first thing that struck me was the faded picture on the front cover of an extremely youthful Dr Barnett standing shoulder to shoulder with Mr Raeburn ; both Headmasters are staring implacably into camera – Whitgift’s past and present  caught seamlessly in one perfect shot. Inside, an article entitled ‘Head to Head’ sees them both interviewed about their respective visions for the school and it makes for a very interesting read: Mr Raeburn, “In some ways, I wish I’d had the courage to introduce the International Baccalaureate about ten years ago.”; Dr Barnett, “I’m in no sense whatever against the idea of co-education.”; both Headmasters, “change should be a process of evolution, not revolution.”

In other sections: the careers of two Whitgift teaching stalwarts, Ken Nicholas and Don Rose, are celebrated; Mr Raeburn’s final school production, Volpone, is reviewed with searing honesty by Whitgift’s own answer to Kenneth Tynan, Mr John Branston, “I am sorry to be only mildly enthusiastic about David Raeburn’s last production…”, and the First XV’s first victory over Ampleforth in almost two decades is celebrated with a whole page spread! Much has changed at Whitigft over the past 25 years, and I, for one, am fascinated to see how this evolution continues under the new Headmaster, Mr Ramsey. Interestingly, I happen to share my office with one of the teachers responsible for the production of the next edition of the Whitgiftian; I’ve got a good suggestion for him for the front cover!