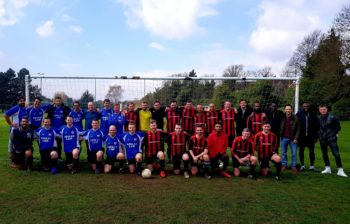 In mid-April, OWAFC hosted a 21st anniversary club day at the world(?) famous Croham Manor Road arena. Former and current players who have appeared for the club since its foundations in 1998 came back to Whitgift Sports Club and enjoyed a competitive friendly fixture.

In bright spring sunshine, over 30 players took part in the match, with many more enjoying the spectacle from the sidelines. An OWAFC legends team was captained by club icon and current centre back Mike Tarlton (OW 1984-91). One of the original founding fathers, Mike has appeared in every season since our 1998 beginnings, amassing an incredible 414 appearances (and counting!).

With some spectacular goals and equally spectacular misses, the match ended with a 6-3 win to the “The Blues”. Special mention must go to the former players who travelled from far and wide to attend. They certainly haven’t lost their footballing talent and gave our current squad a good run for their money. The commemorative celebrations and stories of seasons past extended long into the evening, with plans afoot to continue this new tradition next season.

Our first ever club day captured 3,600 appearances in one photo.

Our 21st season was another positive one for the club, with 41 games played over 8 months.

The 1st XI – competing in the AFC Division 1 South after promotion last term – took the step up in quality in their stride. The team didn’t draw a single game over the course of the season, always going for the victory. We battled on after we lost some key players over the period to some serious injuries, including anterior cruciate ligament tears, ruptured achilles tendons and torn biceps! We were pipped to 3rd place on the final day of the season, finishing one victory away from a third successive promotion!

The 2nd XI continued their push for promotion from a highly competitive league. A few unfortunate results towards the end of the season took this opportunity away. Our achievements were even more noteworthy given the majority of the season was played without a regular goalkeeper, with everyone taking a stint between the sticks (some much more competently than others!)

We begin our pre-season training in July and have friendly matches over the summer. If you or any of you of your friends are interested in joining please email oldwhits@gmail.com for more information.