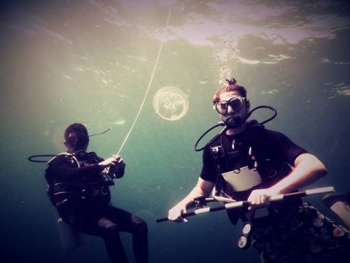 Charles Melbourne (2009-14) successfully applied to the Old Whitgiftian War Memorial Fund for a grant to help fund his overseas expedition as part of his Oxford University Studies. Here is his report:-

I have just returned from my 6-week expedition in the Yucatan Peninsula region of Mexico where I worked for a conservation group called Operation Wallacea, which has many different expeditions in biodiversity hotspots all over the world.

The first 3 weeks were spent in the Calakmul forest bio-reserve. Here I learnt many skills that were key to recording data for the conservation efforts of the reserve. I learnt how to identify, mist-net and process many bird and bat species, which are good indicators of the health of the forest. I also learnt how to track large mammals, recognize, measure and date the tracks of large cats and game, such a Jaguar and Tapir. I also completed herpetofauna transects, as reptiles and amphibians are good indicators of the effects of drought in the area, as well as habitat plots, which were essential to assess the health and diversity of the trees present and were used to bind all of the different data sets together.

The data collected will be used to put forward a case to the government in appeal against building a super-highway through the core region of the bio-reserve, as well as to show the effect of drought on the area’s biodiversity.

The last 3 weeks were spent in the Akumal nature reserve, by the coast, which has struggling populations of green and loggerhead turtles, as well as a natural coral reef. The area has only been made a nature reserve in the last year, so many policies are not yet being enforced. In the first week there, I learnt how to dive with the PADI open-water course, as well as having to learn all of the fish, invertebrate, algal and coral species found in the area. Once these courses were completed, I was then able to get involved in recording scientific data for the last 2 weeks. We did transects on the reef in order to monitor the species diversity of the flora and fauna on the reefs, as well as monitor the scale of coral bleaching that was occurring. We also did turtle transects and sea-grass transects in the bay area, where we monitored how the large number of tourists were affecting the health and behaviour of the turtles and the sea grass beds that they feed on. The data we collected will hopefully be used to be put forward to the Mexican government in order to try and enforce tighter regulations on the public use of the nature reserves so that they actually serve their purpose.

The money granted by the Old Whitgiftian War Memorial Fund helped pay the internal travel costs, as well as the hiring of scuba equipment and PADI open-water course. The trip has aided me academically, as it has given me first hand experience of topics I study as part of my Biological Sciences degree at the University of Oxford, as well as giving me an insight into possible future career paths. The expedition was such a rewarding experience, one that I will cherish and remember. I was able to meet some amazing, like-minded people, gain some useful contacts and experience a new side of biology that I had not previously considered.