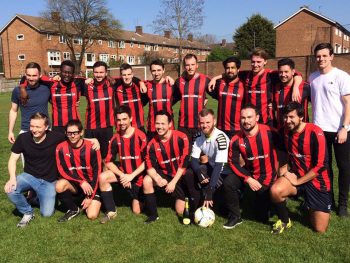 It is with great delight that for the first time since we switched to Saturday football, well over a decade ago, we are CHAMPIONS!

Our first XI won the South Division 3 of the Amateur Football Combination. Led by a true enthusiast of the grassroots game Bill Biss as goalkeeper and manager, and powerhouse captain John Mensah, a team packed full of Old Whitgiftians triumphed whilst keeping the meanest defence and outscoring everyone else. At the time of writing four players, all OWs, reached double figures and are still competing for the illustrious golden boot with one game to spare. James Gutteridge OW (2002-10) leads the way with 13 goals, but is closely followed by Tom Steadman OW (2003-10), Max Kirchner OW (2002-10) and Lee Murphy OW (1982-87).

Kenny Cobbett OW (1992-2000), our club’s record goalscorer, has been only able to play occasionally due to parenting duties but has amassed seven goals this season and most importantly broke the 150 OW goal barrier and still stands as the only player to reach triple figures for the club. Despite the goalscorers stealing the headlines it was our new centre back Matt Hilton OW (2003-10) who won the players’ player of the season award, and much deserved it was. Midfield dynamo Jamie Lammas OW (2003-11) scored our goal of the season in our title winning match, brilliantly charging through on goal and blasting a shot with the outside of his boot in off the far post to rapturous applause to the record traveling crowd against the Nat West Bank first XI.

The second XI have also enjoyed a successful season, finishing a respectable fourth in South Division 8 but only losing one more game than the first XI. It was a slow start to the season and an unprecedented run of five draws in six games in the middle of the season which prevented us running for promotion. Results picked up towards the end of the season with only a single defeat in 2017. At the time of writing Lingan Gnanasekaran looks to have finally beaten his best mate and strike partner Jay Patel to the golden boot at the third attempt with 16 goals to Jay’s 12. Richard Ferguson OW (2000-08) has yet again won our player of the season vote, after another season filled with effort and guile in midfield. We have welcomed new players Jack Timbers, Mike Oprych and manager’s player of the year James De Rosa who have all strengthened our settled squad with enthusiasm and energy. Mike Tarlton OW (1984-91), the only founding member of OWAFC still playing into our 19th year has enjoyed one of his most successful seasons in front of goal with four goals; not bad for a centre back!

Much like Mike’s footballing career, we are enjoying something of an Indian summer in our season. Due to excellent weather over the winter our fixture schedule was completed earlier than usual, and our league has set up a number of “Spring Cups”. Our second XI entered the Junior Novets Cup and we have just won our group and will be entering the semi-finals. So there is chance the next time I write our report for you I will have news of further silverware. Whether we win it or not, the club is in the best health it has ever been and spirits are high. If you or any of your friends are interested in joining please email oldwhits@gmail.com for more information.