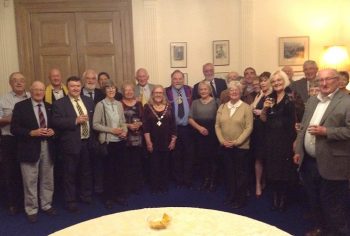 Geoff Austin OW (1958-66), who is currently serving as Mayor of the Royal Borough of Kingston Upon Thames invited fellow OWs, collecting known as “the Hobos” to join him for drinks in his ‘parlour’.

The Hobos are a group of OWs who all played rugby for OWRFC (rather a long time ago now) who are celebrating their 40th anniversary this year. The Hobos meet a couple of times a year.

Thirty OWs enjoyed the Mayor’s hospitality and listened to an entertaining talk by the Town Sergeant on aspects of Kingston’s history. Most then moved on to a nearby restaurant for a pleasantly social supper.