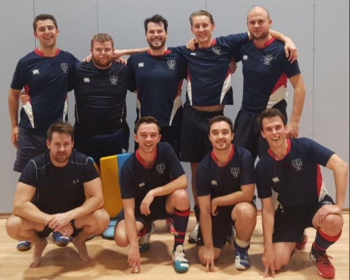 The hockey section had another fantastic year in the 2017/18 season. Two promotions were won by the Men’s 2nd XI and Men’s 3rd XI, as well as the Men being crowned Surrey Indoor Champions.

The Men’s 1st XI following back to back promotions in the 2015/16 and 2016/17 seasons had a year of consolidation finishing mid table in Hampshire/Surrey – Regional 1. Links with the school and old boys remain strong with the 1st XI squad having over 10 players who attended Whitgift as well as being coached by Martin Scanlon (current Whitgift hockey coach). Top goal scorer Dominic Coe-O’Brien (Trinity(!!) 2005-12) scored a phenomenal 45 league goals, not only topping the tables within the club, but also the whole of the South Leagues. This season under the captaincy of Ben Bernard (OW 2005-11) and management of Jon Foley (OW 1975-80) the Men’s 1st XI will be looking at building on the foundations established over the last few years and setting their sights on the Southern Premier leagues.

Last season saw the formation of a new Men’s side, the “COW Rustlers”, a more sociable team comprising of some of our “ageing” stalwarts with an occasional injection of youth. They finished a very credible 3rd in their first year of competitive league hockey and can’t wait to get back into action in the new season.

The Ladies are also going from strength to strength. With a new coaching structure in place under the leadership of David Roche they are also aiming for promotions in the upcoming season as well as establishing a new Ladies development team.

Both the Men’s and Ladies sections are looking for new players to join us this season, if you, or any OW’s that you know, friends or family are interested in playing hockey then look no further! Old/young, male/female, experienced player or just want to try something new – we pride ourselves on offering hockey for all as well as a great social scene. Running 5 Men’s, 2 Ladies and a Mixed team there really is something for everyone.

With huge success on the pitch Croydon & Old Whitgiftian Hockey Club clearly are emerging as the best hockey club in the Croydon area and we want to keep building on this success.