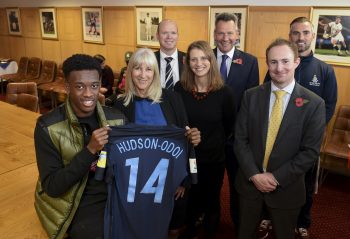 On Thursday 9th November, Callum Hudson-Odoi OW (2012-15), visited Whitgift to meet staff and boys wishing to congratulate him on his recent FIFA U17 World Cup win. The 17-year-old represented England in the football tournament, hosted in India in October, and took on the role of chief goal creator, helping the team achieve a 5-2 win over Spain.

Callum joined Whitgift in 2012, having been with the Chelsea Academy since the age of eight. He played a significant part in Whitgift’s Investec Independent Schools Football Association (ISFA) Cup glory. In 2013, his long-range goal in the final led Whitgift to a 5-0 win. The following year, Callum scored a hat-trick, thus ensuring a fourth consecutive ISFA U13 victory for the School. Callum left Whitgift in 2015 – having scored an exceptional 113 goals in three years for the School – to pursue a full-time career with Chelsea FC.

During Callum’s visit to the School, after meeting key staff involved in his sporting and academic development, he joined a group of (very excited) Upper First Form footballers in the Marlar Halls. Director of Sport, Mr Alistair Osborne, introduced him to the boys, impressing upon them that in addition to Callum’s natural talent, part of his success to date has been down to his willingness to apply himself, the respect he shows his coaches, and being a good example to his peers. Callum was then surprised with a video featuring his sporting highlights whilst at Whitgift. A Q&A session followed, where he recounted his best memories of Whitgift (winning trophies!) and he gave some great advice to the boys: be well-behaved, work hard, enjoy your football and make the most of the opportunities available to you.

Callum met up with his classmates, now in Lower Sixth Form, and headed to Edridge Field to enjoy an U13 ISFA Round 3 match between Whitgift and Brighton College. His presence was definitely a lucky charm for the day as they won 7-0!