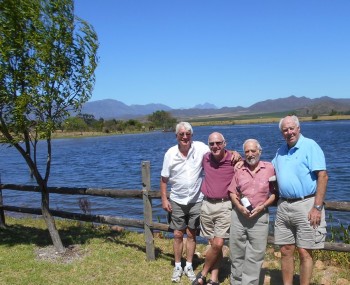 Alan Cowing OW (1953-59) Past Chairman of the Association and currently Chairman of the Whitgift Sports Club visited South Africa in January and enjoyed the generous hospitality of Jerry Hartley OW (1953-62) at his home in Claremont, a suburb of Cape Town. The main purpose of the visit was to watch the second and third days of the England v South Africa Test Match, with Jerry, at the beautiful Newlands Ground nestled below Table Mountain.

Apart from the extraordinary low ticket price, partly as a result of the ailing Rand, compared with those at Lords, £26 against £400 for the two days, they were fortunate to witness a memorable first innings batting performance led by Ben Stokes and Jonny Bairstow who put on a record breaking stand of 399 in England’s first innings total of 629 for six declared. South Africa responded with over 600 in their first innings on a good batting wicket and the match was subsequently drawn.

The next stop was McGregor, a picturesque village, east of the beautiful wine growing area of Stellenbosch, and the home of Keith Poole OW (1945-54) and his wife Marilyn who very kindly offered accommodation and an excellent dinner plus unlimited wine at their comfortable home.

The following day we were joined for lunch at a winery close to Robertson by John Whybrow OW (1944-51) and his wife Sue who had driven up from Swellendam.

Alan was able to bring his fellow OWs up to date with recent developments at Haling Park and Croham Road and was delighted to know that, despite having left Whitgift over sixty years ago, both Keith and John retained a keen interest in their Alma Mater.

The message therefore for all OWs, when travelling to far flung places, is to re-engage with your contemporaries most of whom you will probably not have seen for many years. You might be very surprised to learn what an interesting conversation might ensue!

If you would like help locating OWs in specific regions, please call Vicky Burley at the WA Office on 020 8633 9926 or email office@whitgiftianassociation.co.uk. WA Members may also utilise the online Members’ Directory, where they are able to search for OWs by name, location and years at school and source email addresses of other members. Simply visit www.whitgiftianassociation.co.uk/members/members-directory/ and login using your unique username and password.