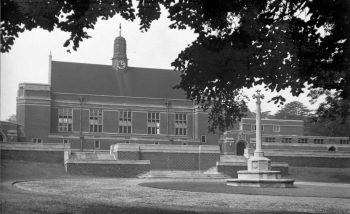 In the early 1950s, when leaving Whitgift, a number of boys who had entered forms 1A and 1A2 in 1944, and others who had joined them as they progressed, formed the 44 Club. I came from Collingwood School which has formed a very important part of my life.

We have always had a President, changing annually, and a Secretary. Changing the Secretary was not ideal but fortunately Piers Hubbard took on this role permanently. He had been at our core since the start. Sadly he died in December 2019 and James Thomas (also ex Collingwood) who had become President in 2018 took on this role also and continues as President.

Since 1953 we have always had an annual dinner (now lunch) and for over 50 years this has been at the Royal Air Force Club of which I am also a member. For many years the number present was in excess of 20. Sadly, but inevitably, the numbers have decreased over time. On our 68th occasion, on 6th March 2020, the number present was just 5. We hope there will be a similar number for our lunch later this year.

Every summer, the President has invited us, together with wives and widows, to his home, a golf club or other similar venue. James Thomas kindly invited us all to Whitgift on 30th May 2019, a beautiful day and 24 of us including 13 girls thoroughly enjoyed the excellent lunch and tours of the School and grounds which were in superb condition – particularly interesting for those who had not seen Haling Park for 60 years. We have 19 Old Boys and 14 widows on our present lists with full communication details.

We all owe so much to Whitgift for our education in difficult years at the end of World War ll and for the lasting friendships we formed there.