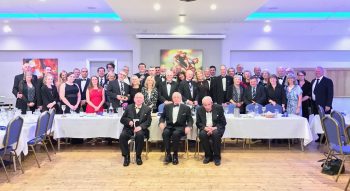 Normally I commence my reports with an update of how the Veterans have performed over the previous couple of months, however on this occasion it seems right to cover an event which is of credit both to the school and more especially our club.

Cast your minds back if you would to that year in La Belle Epoque, namely 1896. Indeed a year to conjure with, including as it did Baron de Coubertin’s realization of the first of the Modern Olympics. Ok, I apologise to those sports historians amongst us who will forever raise the issue of the earlier games at Much Wenlock, but that is for another time…

It was also a year in which Yorkshire scored 887 against Warwickshire….

However, dwarfing these illustrious events was the formation in that year of the Whitgift Veterans Rifle Club, 120 years ago! That makes it one of the oldest clubs in the WA.

To commemorate this occasion, a 120th Anniversary Dinner was held at the Whitgift Sports Club (The “Clubhouse”) in October, attended by nearly 50 members and guests and Lord Graham Tope CBE OW (1953-61), President of the WA, as our principal guest.

The dinner was presided over by our Chairman, Jack Furtado OW (1951-56), in whose safe hands an excellent evening was guaranteed – he did not disappoint. After The Loyal Toast, Jack called upon Graham Clark OW (1952-59) to address the assembled and as the Club’s Archivist he provided a brief but very interesting account of the Veterans history. Graham’s knowledge and enthusiasm over some 55 years of membership is legend as is his service to the Vets. with 12 years as Secretary followed by Chairmanship.

Similarly is Graham’s acknowledged generosity to the Club over the years, further enhanced at the dinner by his presentation of a Chairman’s Badge hanging from a blue ribbon. The 6cm diameter hall-marked badge bears the WVRC logo on one side and is appropriately and beautifully engraved on the obverse by Royal Warrant Holders, Thomas Fattorini. All this at Graham’s personal cost and to be worn by the Chairman at ‘official’ functions. Incredibly generous!

Jack continued by thanking the various officers of the Club for their dedication to the Vets, especially Simon Lacey OW (1979-87) who is relinquishing the very demanding Honorary Secretary role after 5 years which he has undertaken in exemplary fashion: Mark Collins OW (1979-86) is bravely taking over at next year’s AGM… good luck Mark! Many thanks are also due to Simon for organising the evening’s dinner amongst his many other tasks.

Likewise much gratitude to Bruce Barry OW (1976-84) for all his Treasury work which he has now passed on to Rob Beere OW (2000-05), to whom obvious appreciation also. Not forgetting our international shot, Guy Hart OW (2000-07), who will be taking over a sizeable amount of Graham Clark’s Bisley Fullbore organisation and involvement.

On more general topics, it is to be hoped that changes within Whitgift next year could maybe assist in re-instating the school competing for the Ashburton Shield at Bisley each July. From 1878 until 1995 it was the custom for Whitgift to compete in this event as well as other National and County
Competitions, but alas not since 1995! Maybe the school could also see fit to re-instate the role of a dedicated shooting coach for the CCF, as was the case for many, many years prior to 1995.

Certainly the enthusiasm is there amongst the pupils, as evidenced by the continuing and growing support within the Whitgift School Rifle Club so ably administered by Peter Morrison and his colleague Tom Stead. Very usefully assisted by young Henry Parritt OW (2009-16), our most recently appointed committee member and already a valuable asset to the Vets.

The Chairman brought the formal aspect of the dinner to a conclusion with particular thanks to Lord Tope and his wife Margaret for sharing the evening with us.

I hope that as the mere scribe, I have been able to provide in abridged form some flavour of this excellent evening. Not forgetting of course, the excellent food!

Back to a more usual format in my next report, but may I take this opportunity to wish you all (very) early Seasons Greetings.