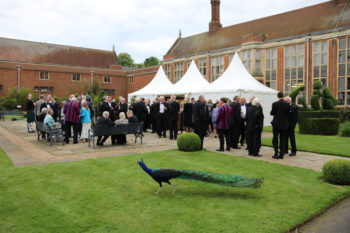 What do one Knight and three Peers of the Realm do on a Friday evening other than take wine with 150 fellow Old Whitgiftians? The 124th Annual Dinner took place in the magnificent Whitgift School Quadrangle accompanied by displaying male peacocks. When summoned by the great Ding Dong, those assembled initially failed to move into the grand Big School dining hall for a sumptuous dinner.

Once seated everyone was entertained by excellently varied musical interludes whilst enjoying a marvellous meal and accompanying wines.

Speeches followed the formal toasts of the sung National Anthem and The Founder when the President welcomed the guests, including his contemporaries, which enabled him to reminisce on his past Whitgift career.

The President was followed by his Son who proposed Floreat Domus with his view into the future direction of the School. The Headmaster concluded with an update on the current, very sound, health of the School and the planned changes for his tenure in charge at Haling Park.

Finally, heard for the first time by many, was the full 1889 version of Carmen sung beautifully by the members of the Whitgift Cappella before members departed happily into the night courtesy of the School mini-bus shuttle service.