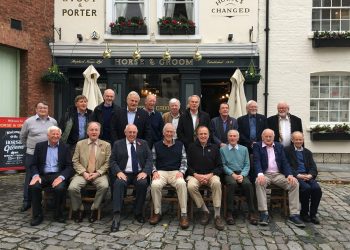 Eighteen increasingly wizened prefects from 1962 met in London on Remembrance Day, suitably enough, to celebrate surviving 55 years. Rounded up once more by the tireless Peter Souster, we met again at the Horse and Groom in Belgravia, a weekday pub opened specially for us on a Saturday, which has hosted in recent years reunions of several groups of early Sixties veterans. Not that the Sixties had yet impinged on the school in any way. Haircuts were still short-back-and-sides, and caps were definitely to be worn. A conservative government had been in power for a decade:  we had ‘never had it so good’. The following year, the Beatles would storm onto the music scene. The Profumo affair hastened the resignation of prime minister Harold MacMillan. And one-day cricket was at last introduced to the first-class game, which in the same year lost for good its Gentlemen v Players match and its ‘shamateurism’. We were ‘post war’ no longer.

So we were in a real sense the last of a generation, but a pretty healthy and well-educated one, to judge by our animation and appetite. Several had flown in from distance: Robert Kibble from San Diego and Gordon Brackstone from Ottawa, while Graham Hill had hopped over from Montpellier. They swelled the numbers from that year’s all-conquering 1st XV, joining Mike Wilkinson, Peter Souster, Brian Councell, Grant Eustace and Robin Holt. That would have made a pretty good seven-a-side team, and what they’d lost in speed most had made up for in weight. They were reminded of that season when they won every game when Peter Cox read from his Memories of Whitgift – the Boys’ Own Tales (£20, still available from all good Whitgiftian offices) – the Guardian review of the hard-fought Dulwich match, watched by a ‘fantastic crowd of 2000’. Whitgift won with the game’s only try, when Kibble took Wilkinson’s scoring pass and raced through to score under the posts with ‘a huge theatrical joyful leap’. His leap may now be missing but his smile is still as broad.

Pip Burley then joined Cox in reading extracts from the story of what became known as The Great Desk Swap of March 1960, in the week of the Martin Jarvis’s memorable Hamlet. An earlier generation of senior prefects, led (it could now be revealed) by the school captain Peter Stevens himself, hatched an intricate plan to swap masters’ desks over in the middle of the night. Nowadays the desks are flimsy affairs, and masters don’t own them. Back then they were extremely heavy kneehole desks, and the team – who’d have been infants in the wartime blackout, and were hardened by years of rugby training – moved them stealthily in the dark down corridors and up and down stairs. All 27 were moved without a hitch, and next morning the ensuing chaos delighted the whole school, enraged some masters and amused others. The urbane headmaster Geoffrey Marlar admired the audacity too much to attempt to identify the culprits, beyond telling Stevens, whom he clearly suspected: “Funniest thing I’ve seen for years. But we don’t want that sort of thing to become a habit, do we?”

Eight of the attendees were in the Prefects’ play of that summer, an uproarious Whitehall farce wittily reviewed by Dick Glynne-Jones: “Miss Archdale (Souster) was quite glamorous in a rural sort of way, although her legs were rather hairy and her padding rather loose… Kibble, that splendid old warhorse, had no difficulty in projecting his irascibility and fuddled bewilderment… Eustace’s years in the jazz group must have facilitated his practised look of vacuity… while Burley hid his guile behind as impregnable a façade of geniality as ever made a Captain of the Third XI formidable.” The school audience lapped it up, and the cast manfully battled to keep straight faces. Yes, those were indeed the Days.