A Meeting With the Prime Minister 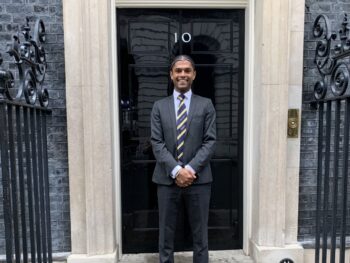 Old Whitgiftian and past School Captain, George Oyebode met with the Prime Minister, Boris Johnson to discuss solutions to tackle racial inequality in the UK. George recently graduated from Oxford University, having studied Classics and Arabic. He is now on a six month placement at the UN World Food Programme (laureate of the 2020 Nobel Peace Prize) and co-runs the creative engagement company ‘The Soulstice Collective’ with his brother and OW, Jamie Oyebode (2008-13).

On Tuesday 27 October 2020, I was invited with four other young black students and graduates to 10 Downing Street for ‘Black History Month: Future Leaders Discussion’ with the Prime Minister, Boris Johnson and the Parliamentary Under-Secretary of State for Covid-19 Vaccine Deployment Nadhim Zahawi MP. This was the third Downing Street event for Black History Month: the first was for black healthcare workers and the second for black military service people.

The purpose of the event was to celebrate the success of young black individuals in the UK and to discuss what more can be done to invest in black talent and overcome racism. The latter half of the discussion gave us the chance to challenge and offer suggestions to the ministers such as the importance of better financial investment in black businesses, the need for more diverse voices in policy-making and the demand for funds to help Black, Asian and Minority Ethnic (BAME) members through further education.

During this visit, I said to the Prime Minister that to address racism our society must discuss its past and act on its current existence without fear but with honesty and perseverance, stressing the government’s integral role in doing this. The conversation was dynamic and productive, evidence of this being both the Prime Minister and Minister Zahawi stayed with us for longer than the allocated time.

When reflecting on the afternoon, I feel honoured to represent black voices in the community, privileged to do so in such a setting, and proud – four years since leaving – to be an ambassador for Whitgift.