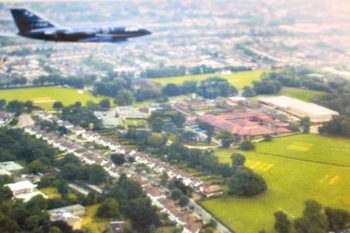 David Linney OW (1959-66) and I were both cadets in the Whitgift School CCF RAF section. David chose the RAF as his career and following his last assignment on Harriers he joined Flight Refuelling Aviation at Bournemouth flying Dassault Falcon 20 executive jets that are used for training Navy personnel in aircraft defence.

In 2006 Sir Michael Cobham, the second son of Sir Alan Cobham, died. A memorial service was held at St Clement Danes in London on June 13th 2006. A flypast by two aircraft was arranged with one being flown by David Linney. The aircraft on their way back to Bournemouth overflew Whitgift School and the unique photo was taken of David’s aircraft G-FRAK overflying Whitgift School.

A copy was made and framed and presented to Howard Bairstow on his 70th birthday and this now proudly hangs in his home.