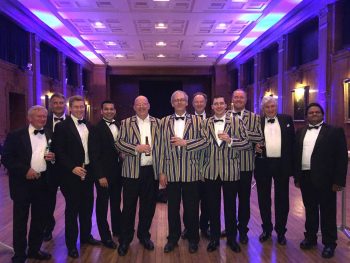 The WA Annual Dinner was held on Friday, May 26th at the Royal College of Surgeons

This year’s Whitgiftian Association 122nd Annual Dinner, hosted by WA President, Dr Richard Bateman, was a splendid affair with an audience of 130 OWs of all generations in attendance. The event was held at the historic Royal College of Surgeons in Lincoln’s Inn Fields.

On arrival in the marble pillared entrance hall, guests were welcomed to the rousing background music of the OW Corps of Drums. Pre-dinner drinks were served in the magnificent Edward Lumley Room, after which most chose to go on a guided tour of the internationally famous Hunterian Museum prior to returning to their tables to enjoy an excellent four-course dinner.

Richard Bateman OW (1967-1974), President of the WA and Chairman and host for the event, welcomed everyone to the venue and took the opportunity to welcome his personal guests, who included colleagues from the medical profession and fellow Members of the RCS.

After dinner, we were privileged to be entertained by a remarkable young OW musician, the gifted violinist Grig Cuciuc OW (2009-11). Introduced by the Headmaster, Dr Christopher Barnett, Grig treated us to a virtuoso performance on solo violin that was rewarded by an ovation from an appreciative audience.

Presiding over the after-dinner speeches with a toast to the guests, Richard Bateman spoke of the profound effect of his Whitgift education, saying that he could only speculate on where he would have ended up without it – almost certainly not as a member of the Royal College of Surgeons! He also referred to the importance of the WA Bursary Fund in helping boys who might not otherwise be able to attend the School so that they could benefit from the outstanding education it offers – and which he hoped as many OWs as possible would support. He welcomed Naomi Newstead, representing the Fund, to the dinner and encouraged guests who might feel in a generous frame of mind to make themselves known to her.

The President was followed by Dr Sam Barke (2000-2005), a trauma and orthopaedic surgeon, who amusingly referred to having happy memories of the Edward Lumley Room, having previously been there twice to fail his entrance exams! He finally gained his surgical credentials at the Scottish branch of the RCS who some regard as arch rivals! Sam spoke enthusiastically about his time spent at the School and, subsequently, as an active Old Whitgiftian. He referred light-heartedly to a conversation he had with the Headmaster whilst in the 6th Form when Dr Barnett had told him he wouldn’t get anywhere in life if all he did was play Rugby. Sam hoped that the HM’s prediction might have turned out to have been somewhat negative! He went on to emphasize his belief in the importance of the WA and the role it has to play, not only in keeping OWs in touch with each other, but also in mentoring and assisting boys leaving the School to establish successful careers in their chosen fields. He concluded by proposing the toast of ‘Floreat Domus’.

In response, Dr Christopher Barnett concluded with a brilliant speech outlining his twenty-six years at the School and the many changes over which he has presided. He said that he was sorry to be retiring but believed he was leaving the school at its highest point, offering an unequalled experience to current students which would make many OWs wish they were attending Whitgift today!

The President thanked the Headmaster for attending so many WA Annual Dinners over the years, especially this one on the eve of his retirement and “spoke on behalf of all OWs in thanking him for his many achievements and wishing him well in the future”. Presenting Dr Barnett with a specially engraved pewter Tankard from the Mary Rose Collection, he said that as President of the WA he was proud and privileged to offer Dr Barnett honorary lifetime membership of the Whitgiftian Association.

The formalities were rounded off with an unaccompanied rendition of “Carmen” after which the company dissembled into the night.

A truly memorable evening with thanks to our President, the staff of the Royal College of Surgeons and to all those who contributed to the event in every way.