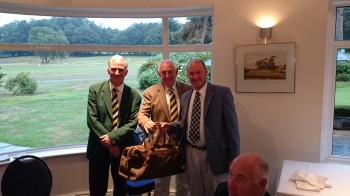 Last year at about this time, I was able to report a great run for Whitgift in the Cyril Gray (competed for by 32 Halford Hewitt schools, with team players needing to be over 50), but unfortunately this year the path to the final was blocked in the first round by Blundells, who beat Tony Mason’s team 2-1.

No success either for our team in the annual match at Royal Wimbledon GC against KCS Old Boys, where the margin against us was 3.5 – 1.5. I make it five years in a row that KCS have won this, but then again, we are up against a team which normally includes at least five RWGC members!

Better news then to report, albeit by proxy, that the school golf team scored a tremendous victory in the 2015 HMC Foursomes competition at Purley Downs, where they beat Wellington 2-1 in a tense final, the deciding match being settled on the 18th hole. This is a great achievement, a first for Whitgift in this event, and of course it demonstrates yet again the strength in depth that is building up for our future teams in the Halford Hewitt competition, also a foursomes event.

For most OWGS members, the major event in the period was Mike Wilkinson’s President’s meeting, held in mid-August at The Addington, where Mike used to caddy in his younger days. Although August has been generally disappointing, the weather was relatively kind for a field of 29 players, and scoring was good on what is always a tough course to play. Getting on for half the participants scored 30 points or more. However the winning scores were even more impressive; Peter Blok won the President’s Putter, and a prize presented by Mike, with 39 points, boosted by some super work on and around the greens. In doing so, he prompted a suggestion from captain Tony Harris that the recently established two-shot handicap reduction for meeting winners should perhaps carry over into the annual knockout competition, in which, as irony would have it, Tony might face Peter in the final! David Absalom took second place with 36 points, and Don Anderson third with 35.

Our final meeting of the season will be at Royal Ashdown on 27th September. This is a Sunday meeting, and we hope golfers who work during the week and cannot normally get to our meetings will be able to join us. OWs, teachers and parents qualify to join the society and are encouraged to contact me for further details.