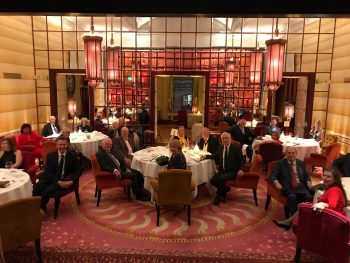 A fundraising dinner for the Bursary Appeal in a unique central London setting is becoming something of a tradition for the Whitgiftian Association and this year was no exception. We were extremely fortunate to hold a dinner at the two Michelin-star dining room in the outstanding sketch restaurant in Mayfair.

sketch is a remarkable place to visit, buzzing with activity in the main entrance and adorned with contemporary artwork.

On arrival guests ascended to the Lecture Room and Library which is revealed when the waiters open the double doors to the magnificent restaurant. This eighteenth century townhouse has a beautiful domed ceiling and ornate plasterwork. Guests enjoyed champagne and canapés by the glorious full height sash windows overlooking bustling Conduit Street.

Guests were then seated in the sumptuous dining area, with tables decorated with seasonal flowers, to enjoy the full experience of the two Michelin-star service and dining. Freshly baked bread crafted by sketch’s renowned French pastry chef was followed by a remarkable and imaginative meal including venison served a variety of ways and a delightful trio of desserts. French wines were served and each guest was given a gift voucher, donated by sketch, to use when visiting again.

Guests enjoyed a speech by Lord David Freud OW (1961-68), WA President, who gave an insight into his involvement with various ministers and Prime Ministers during his work on welfare reform. He spoke about the importance to us all that young people in Britain are well educated. It was a privilege to hear from someone who brought considerable intellectual rigour and creativity to government.

We were due to hear from Henry Kerr, Upper Sixth at Whitgift, about his bursary but he had sadly been taken ill and was in Accident and Emergency that day. We wish Henry a speedy recovery. He is working extremely hard for his A-levels and is predicted to get excellent results. Simon Beck, Registrar at Whitgift, spoke on his behalf and explained how this naturally bright boy from New Addington, who could not afford the fees, has thrived at Whitgift and excels in maths and science. His bursary has improved his prospects and helped him reach his full potential and he will no doubt have high aspirations for his children. This cycle of prosperity created by social mobility can only benefit our country and is made possible by bursaries.

Simon Beck then undertook the fundraising auction. OWs and parents once again donated a wonderful range of prizes and we would like to extend our thanks to those that donated including Lord Graham Tope OW (1953-61), Johannah Ball, Amanda Ross, Andy Bradshaw OW (1963-69), Adam Thompstone OW (1999-2006), Callum Hudson Odoi OW (2012-15), Rob Holland, Rashid Abbe and Andrew Gayler OW (1956-64).

We would like to thank all our guests that participated in the auction for their generosity and particular thanks to the winning bidders – Pip Burley OW (1955-62), Christine Burley, Justin Owens, Mr and Mrs Peerbhoy, Simon Morris OW (1971-75), Simon Beck, Val Baxter and Peter Thorburn OW (1953-61). Thank you to all our guests for participating and special thanks to Louise Bratchie, our youngest guest, for spending her evening with us and winning Dominic Sibley’s (OW 2007-14) cricket shirt!

The success of this event would not have been possible without the generosity and support of Johannah Ball and the Chief Executive Officer of sketch. We would like to extend our heartfelt thanks to them for making the evening possible and for the additional touches that made it so enjoyable for our guests. Thanks too to Lord David Freud OW for his generosity, support and involvement. We appreciate it enormously.