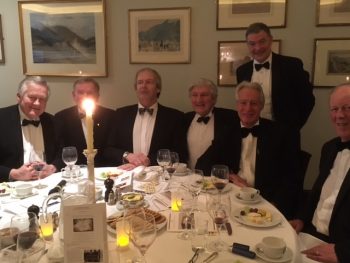 The Whitgiftian Association held a spectacular fundraising dinner at The Athenaeum in Pall Mall on 19th January 2017. The use of this stunning venue was kindly made possible by Dr Peter Warren (1947-1956). It was a very special evening for the WA which has only in the last year commenced fundraising for bursaries to ensure that talented boys from low income families can be educated at Whitgift School.

Guests congregated in the newly refurbished Garden Room for pre-dinner drinks and music accompaniment by the Whitgift String Quartet.

Richard Bateman (1967-1974) WA President welcomed guests and thanked them for their support for the dinner, in particular Leon Sacks (1962-1970) who had travelled all the way over from Florida and Stuart Woodrow (1968-1975) who hosted a table of friends to support the dinner.

An exemplary four course seasonal dinner was served, throughout which there was a programme of speeches and entertainment. Jonathan Bunn (1980-1988) WA Chairman spoke in support of the Bursary Appeal before guests enjoyed their meal. After a main course of delicious roast grouse, Pip Burley (1955-1962) introduced the Bursary Appeal and did a great job getting everyone involved in a game of Heads and Tails.

After dessert, guests were served cheese and biscuits, coffee and chocolates and Simon Beck (Registrar) then introduced our special guest for the evening, Sussex cricketer Laurie Evans (1998-2004). Guests watched some fantastic footage of Laurie in action on the pitch before he gave a speech filled with humour and passion. He explained how Whitgift had nurtured his talent and promise, helping him fulfil his dream of becoming a professional cricketer with first class coaching but also with resilience and self-belief. Laurie spoke in support of the bursary appeal, explaining that without financial assistance, he would have been unable to come to Whitgift, missing out on all the coaching and support that he needed and that the School could offer him.

Guests were then treated to a short video of the Lower School boys talking about how much they love Whitgift and why they are so happy to have been offered supported places. This served as a reminder that a healthy bursary fund enables the School to select boys on merit over ability to pay.

Our guest, Verity Gallagher, then selected the winning raffle tickets. On offer were some great prizes including the extremely popular WA Claret.

We then moved on to our fundraising auction which was brilliantly conducted by Simon Beck and Pip Burley. Congratulations to the following who won some amazing prizes, ranging from a private flight to France to dinners at the most sought after restaurants in London and thank you so much for their generous bids and support: Jonathan Bunn, Mark and Louise Endersby (1975-1983), Ian Flanagan (1949-1954), Diana German, Stuart Woodrow, Keith Sherman (1961-1968), Pauline Stone and Ken Rokison (1947-1955).

Finally, we heard from Yvan Bollet-Quivogne (2008-2015), who was only able to take up a well deserved place at the School with a Whitgift Foundation Bursary. He spoke about what it has meant to him and his prospects in life to have experienced such enrichment and academic success at Whitgift.

Pip Burley summed up an unforgettable evening by thanking, in particular, our host Dr Peter Warren and the Whitgift parents, the Headmaster and OWs Richard Bateman, Lord Freud and Lord Tope who so generously donated such splendid auction prizes. Dr Peter Warren concluded by thanking all for attending.

The entire evening raised £21,000 for the Bursary Appeal and the WA is extremely grateful for all the support from OWs in the success of the dinner.

I hope WA members will consider joining us at future bursary fundraising events as a good time is assured and it is a fantastic cause!