If Carlsberg did school reunions, then they would probably be the best in the world.

This was the underlying thought, surrounded by empty cans of lager for inspiration, that went into designing the 40th anniversary reunion of Whitgift’s Class of ‘78. Research showed that having waited four decades for a mass gathering, it wasn’t just a short, formal event where the Old Boys would gather briefly for an evening and disappear that was required. We were seeking a weekend of festivities that would justify the efforts of those living abroad coming back to England and those in the north travelling south; we wanted the time so that we could get to know old school colleagues once more, and we desired total informality. 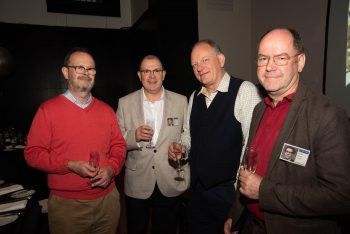 Tracking down Old Boys is not easy. The school, despite the excellent cooperation of Donna Lewis, is hamstrung by the legislation on data protection, and if it sends out a generic notification of a reunion then inevitably the response is limited. Consequently the event organiser realised that two actions were needed:

The event took almost a year of planning, by which time we had 50 students from the Class of ‘78 travelling from New Zealand, Dubai, Milan, Mainz, Milford-On-Sea, Hexham, Halifax and Harrogate attending from Saturday lunch to Sunday late afternoon.

Once the Old Boys had accepted their invitation, they were then asked to suggest Sixth Form, Sports and CCF Masters whom they would like to see again. Twenty were invited. David Raeburn (Headmaster, 1970-1991) was asked to come as Guest of Honour. At first David said he wasn’t sure if he could come given that the timing could clash with a trip to Greece with his students. “But David, you’re going to be 91. You should be sitting in front of the fire, wearing your slippers, proverbial pipe in mouth and sipping a hot cup of cocoa!” Not a chance! Anyway, it eventually transpired that the two events were separated by a week so David did come and he was the Guest of Honour.

It was agreed that Oxford would work well as the location. The consensus was that if we were away for a weekend we wanted to fall into our beds from the bar at the end of the Saturday evening, difficult in Croydon. Outside term time Oxford has its colleges with their student rooms to rent and is easy to access. 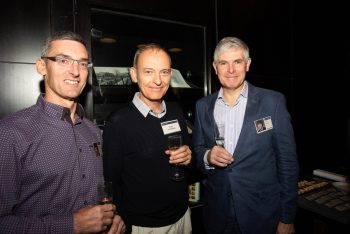 Masters and their wives who needed transport from their homes were chauffeured to Oxford by various OWs. We organised a free taxi service so that once in Oxford the elderly guests could move easily around the City.

A professional photographer was on hand to record the event and a digital hub was established upon which we could place all of our recordings of the evening, whether still or video.

Photographs from 1976 of all of the OWs attending the weekend were provided by Bill Wood, the school’s archivist, to event organiser, Francis Charig OW (1970-1978). Simon Hutton OW (1973-1978) then incorporated those pictures into name badges worn to help the Masters recall the person to whom they were talking – but of course really the Old Boys needed it for their own aid too!

Jonathan Darnborough OW (1970-1978) made sure that the background music playing in the evening was constructed to complement the atmosphere. Simon Bates OW (1970-1978) had added to his digital hub by collecting a series of videos from OWs talking to camera who had been unable to attend.

For many months an email thread was in operation for all those attending and also those who wanted to attend but could not, during which we wallowed in nostalgia of Whitgift in the ‘70s. You can imagine all of the emails that began, “Do you remember when….?” It meant that a lot of the ice had been broken by the time that everyone arrived at the reunion, a process that paid significant dividends. 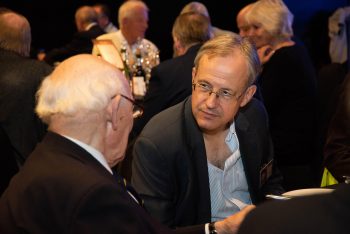 The final itinerary was:

Lunch at Cherwell Boathouse, Oxford. Masters in the Conservatory; OWs in the Main Restaurant. Reception, dinner and two bars at Malmaison Oxford.

There were more than 35 present for a long Saturday lunch at the Cherwell Boathouse. The Old Boys were thinking that this was the one opportunity for Masters and their wives to misbehave, so the former staff were in one room, probably throwing buttered bread at each other while the Old Boys sat, talking animatedly to one another in the restaurant’s main dining room. By early evening, most of the attendees had gravitated from the restaurant on the river to the City Centre to be joined in The Visitors’ Room at the Malmaison by a further 40 or so, made up of ex-Masters and many of the ex-pupils who had been unable to arrive earlier in the day. This was described as ‘The Main Event’ and was a thank you to David Raeburn. 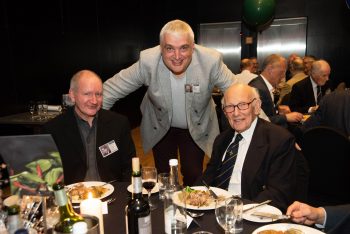 The Malmaison, located inside Oxford Castle, used to be Oxford Prison until the 1990s so there were plenty of comments about this being a subliminal euphemism! Most of the attendees stayed at Keble College but a few stayed at the hotel in rooms named after former prisoners, Francis, for example, staying in ‘The Jeremy Keable Room’. Photographs of David Raeburn and the former Masters and their wives were then taken by the professional photographer using what was A-Wing before the prison’s conversion into a hotel.

After the reception of Champagne and canapés, the guests sat for dinner across eight tables named after each of the Senior School houses, a large helium balloon in the appropriate house colours flying atop every table. Astonishingly given the time lapse, the right housemaster from 1978 sat at five of the tables, Andrew’s with Peter Trevis (1965-1994), Dodd’s with Norman West (1967-1998), Mason’s with Ken Nicholas (1956-1991), Smith’s with John Branston (1956-1997) and Tate’s with Peter Gaillard (1970-1984).

At the end of dinner there were video messages from a number of OWs from the Class who were unable to attend as well as speeches from the floor from Peter Gibson (1965-2003) lauding David Raeburn, and from David Raeburn himself who received a lengthy and emotional standing ovation. Julian Gunn (1970-1978) made a joyous speech sharing his great affection for his time at the school. A series of carefully considered toasts were proposed by Simon Lambert (1970-1978), School Captain for the Lent and Trinity terms of ’78. Francis Charig was emcee and he told a series of lighthearted stories. These were mostly true, largely about various former staff members, including Chemistry Master, Jim Godbolt (1971-1975) leaping half asleep from a fast moving train, chaos in the classroom with Freddie Percy (1937-1976) and ‘the two letters’ story about David Raeburn found in the book, ‘Memories of Whitgift’. A collection of Francis’s tales about John Kelsall (1968-1978) were true in parts, but at least one was conceived by Francis while in the shower and had no historically factual basis whatsoever; but whether true or false, it was all highly affectionate, or at least that will be his defence at his defamation trial. Because of the 17 in the Class of ’78 who went on to have medical careers, Francis reported the time he was treated for Falciparum Malaria by two OW doctors, bizarrely his own brother, Mark Charig OW (1967-1975) and, from the Class of ’78, David Grant OW (1970-1978), the former claiming to write on the notes at the base of Francis’s hospital bed, ‘Do not resuscitate’. Francis also told of being groped by seven female medical students in the Royal Marsden Hospital, a story best not repeated and one that didn’t have a happy ending. After the speeches, the guests occupied two bars laughing loudly until the last drink was finished at just past four in the morning. There was now time for only the briefest of sleeps before breakfast and then onward to ‘The Two Gunn Salute’. 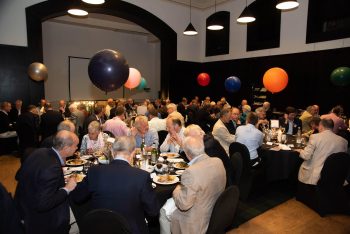 The reunion took place one week before Steve Gunn OW (1971-1978) began his tenure as Acting Warden at Merton College. The other and unrelated Gunn, Julian, is both a gifted doctor and a talented organist. The two led ‘The Two Gunn Salute’ that Sunday morning. Most surprising was the number of those who turned up mid-morning to attend. Given the previous night’s exertions, Francis estimated only a handful would have the energy needed to make their way to the College, but this transpired to be wildly wrong with more than fifty present. They were rewarded by special performances from both of the Gunn OWs. Steve, fresh from an amusing appearance on Cunk on Britain on BBC1 gave a highly insightful, interesting and amusing tour of Merton College which included him highlighting its Whitgift connection, while Julian’s stunning recital on the beautiful Merton College Chapel organ lasted for more than one hour, holding his audience transfixed.

Julian finished the Salute by gathering us around the Merton organ and leading the most rousing and surprisingly tuneful rendition of ‘Carmen’ that the author has ever witnessed. Tears were shed before we moved on to the Folly restaurant on Folly Bridge for another lengthy and excellent lunch that concluded proceedings for the weekend.

That it was an extremely happy and extraordinarily successful reunion is a consequence of a special bond between the Old Boys that has outlasted a gap of four decades and also a reflection of their relationships with their Masters. As one former pupil explained in a note to Francis Charig afterwards, every single former student he had met at the reunion was ‘a gentleman’. And so say all of us. We now make plans for 2020, the 50th anniversary of those who joined in the Lower Firsts, which was simultaneous with the arrival of the much loved David Raeburn as Headmaster.

For information on future events for the Year of ’78, please contact Francis Charig at francis@charig.com. He is also happy to assist those working on reunions for other years should they so wish.

OWs named in this report: