Countdown to “Remembering 1916 – Life on the Western Front” 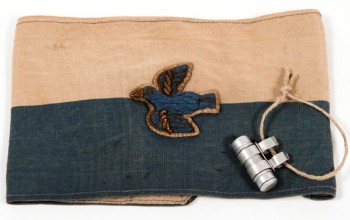 Project Manager, Fran Stovold, provides a sneak preview of what we can look forward to in 2016 when the School opens its doors to the public for its exhibition, “Remembering 1916 – Life on the Western Front”

In focusing on the pivotal year of 1916, this centenary exhibition will explore the year, both chronologically and thematically and provide context by walking visitors through time. It will close with the opportunity to reflect on the memory of those who lost their lives and the new world order of 1918 onwards.

The Performing Arts Centre has undergone extensive refurbishment and has been transformed into the new Whitgift Exhibition Centre. The Exhibition Project Team have catalogued and researched more than 500 objects. These artefacts are mainly drawn from the extensive collections of five generous private collectors including Old Whitgiftians. Many are extremely rare, either being the only known examples, or one of only a couple known to have survived. By bringing these items together, a narrative is created, which has not previously been told. Visitors to the exhibition will be able to follow the threads of the lives of British, French and German servicemen and women, and their loved ones.

Key items to look out for include two original first issues of the British trench newspaper, The Wipers Times, known for its wry sense of humour; rare examples of uniforms and equipment; a rare pattern of the British Brodie helmet; an early Women’s Royal Air Force uniform; an original sign from Verdun train station, the town being the site of the bloodiest battle of the war; and a piece of fabric from the famous red tri-plane flown by the Red Baron, Manfred von Richthofen.

Art lovers will be able to take in examples of contemporary work in a contrasting range of styles. Highlights include a set of detailed original pastel portraits of allied soldiers; a series of hard-hitting graphic political cartoons; and an impressive selection of iconic recruitment posters.

Crucially, for an exhibition looking at the political and social background to World War One and the events of 1916, the exhibition will also draw on the voices, recollections, writings and opinions of British, French and German soldiers and their families. A number of these lives have strong Whitgift connections.

The War on Land

The exhibition will include two large feature displays on the two key battles of the Western Front in 1916: Verdun and the Somme. The former saw the French and German troops pitched against each other in the longest battle of the War, the latter was arguably the most infamous battle of the War. The Somme offensive was meant to breakthrough German defences and the stalemate of the Western Front, but poor planning resulted in unprecedented allied losses on the opening day. The Somme display will include the story of Old Whitgiftian Captain Dennis James Herbert Ely, who was killed aged 20 on 1 July 1916.

The War in the Air

Remembering 1916 will chart the rapid development of the Royal Flying Corps and explore the growing importance of aerial warfare, both for reconnaissance and control of the land below. In exploring this, the displays will focus on the dramatic story of Old Whitgiftian Second Lieutenant Lionel Bertram Frank Morris. Morris’s plane was the first confirmed ‘kill’ of Manfred von Richthofen, more commonly known as the Red Baron. Whitgift has commissioned a number of original pieces of artwork in order to commemorate this terrible event. These include lifelike models of both Morris and von Richthofen, made by the renowned H&H Sculptors (www.handhsculptors.com); an original painting by leading aviation artist Alex Hamilton GAvA (www.alexhamilton.net), which will capture the height of the deadly dogfight; and a replica silver cup, made by a top silversmith Mark Fenn (www.markfenn.co.uk), inspired by the ones that von Richthofen himself commissioned after each of his ‘kills’, complete with the make of the plane and the date. It is interesting but gruesome to note that one of the autopsies of the Red Baron in 1918 was carried out by another Old Whitgiftian, Major-General George Walter Barber, and the exhibition will look at how his work shed new light on the death of the German air ace.

The War at Sea

The exhibition will look at the controversy surrounding the Battle of Jutland in May 1916. Visitors will be able to discover how the largest naval battle and the only full-scale clash of battleships in the War could have but didn’t bring the war to an earlier end.

The War on the Home Front

In contrast to the harsh reality of the Western Front, visitors will get a snapshot into the lives of the loved ones living on the Home Front in Britain, France and Germany. Through the use of letters and postcards home, sweetheart tokens and other personal items the exhibition will convey the shared experience of those at home. Living through zeppelin raids, the rapidly changing role of women, and the impact of the action on the Western Front on people’s lives is clear to see. Scenes from an anonymous British Edwardian home will be brought to life through the creation of three rooms within the exhibition.

The Old Whitgiftian Book of Remembrance

In the last room of the exhibition Remembering 1916 will respectfully acknowledge the 251 Old Whitgiftians and Whitgift Masters who lost their lives during the Great War. A display of 251 crafted metal poppies will provide a reflective culmination to the show, alongside the profiles of each man. Visitors will be able to purchase these poppies should they wish to do so.

From January we are looking for volunteers to come and be part of the Remembering 1916 team as Exhibition Stewards or Education Volunteers. As a Steward you will help on the ticketing desk, cloakroom, manning the galleries and talking to our visitors. As an Education Volunteer you will be part of the team delivering our exciting and engaging learning and events to visitors from 9 to 99! If you are interested in becoming part of the team please contact Education Officer, Michelle Parker-Brown on m.parker-brown@whitgift.co.uk or complete the online form on the website.

The Exhibition will be open to the public daily, between 10am – 5pm, from 12 March 2016 and a series of special events will accompany it. For more information, please visit www.remembering1916.co.uk.