Dan Wows With a Virtuoso Performance 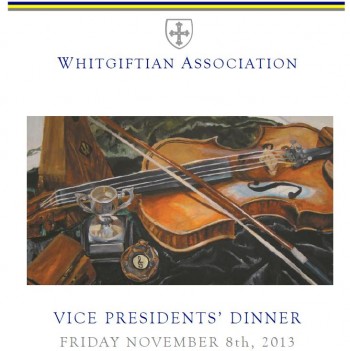 Old Whitgiftians enjoyed a masterful rendition of Ysaye’s “Ballade” for solo violin by seventeen year-old Dan-Iuliun Drutac in the Old Library at the School last Friday evening, November 8th.  Dan is the recent winner of the School’s International Music Competition.

The occasion was a Vice President’s Dinner hosted by WA President, Stuart Woodrow, and attended by forty OWs including nine Past Presidents, twenty-four Vice Presidents and members of the WA Main Committee.  The Headmaster, Dr Christopher Barnett, was Guest of Honour.

Following drinks in the Founder’s Room, the party made its way to the familiar surroundings of the Old Library where the school kitchens excelled themselves by serving a first-class four-course dinner.

Following Dan’s performance, the President welcomed OW author Peter Cox who, with a little help from WA Chairman, Pip Burley, entertained with a series of extracts from his book Memories of Whitgift – the Boys’ Own Tales (CLICK HERE to buy now).  This was followed by a short update on WA matters by the Chairman who concluded with a toast to the School, coupled with the Headmaster.

Dr Barnett responded by congratulating the Whitgiftian Association on its recent re-launch and welcomed the greater engagement with sixth-formers, together with careers advice and mentoring.  He went on to summarise recent developments at the School, including the opening of the Boarding House by HRH Prince Andrew, and referred to the role that he hoped OWs might play in the School’s further development in the future.

The dinner saw the official launch of the Whitgiftian Association Claret, recently selected by a panel of OWs and now available to all members and registered OWs for home delivery in time for Xmas. CLICK HERE to place an order or download the order form. 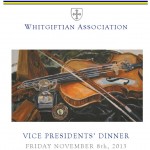