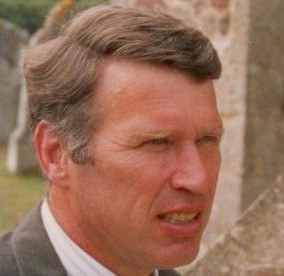 It is with great sadness that we report the death of one of Whitgift’s great characters.

Dick passed away in the early hours of Sunday 10th November in Whitgift House, where he had been a resident since August 21st 2009, having suffered a stroke on Christmas Day 2007.

Dick was, by reputation, the oldest pupil ever to leave the School at the age of 19 years and 6 months and some might say, with a degree of accuracy, that he was a perpetual student for many years thereafter.

On leaving Whitgift in 1956, Dick entered the London Hospital as a dental student where he remained until taking his degree, thereafter working for the professor of bacteriology for a further 6 years. During his time there, Dick played for the Hospital 1st XV and the OWRFC and also represented Surrey, Sussex and the United Hospitals.

He was regarded as an uncompromising prop forward with whom one should not take liberties although, over the years, he sustained injuries that eventually led to him being unable to practice as a dentist (failing the practical though gaining 100% in the theory). His colleagues and friends might well say this was something of a blessing for the patient!

In his post medical career Dick became an expert on trees, both in cultivation and in felling and was on the staff of the Whitgift Foundation, mostly at Trinity School, where he made many lifelong friends.

There are a number of OWs, the writer included, who have cause to thank Dick for cutting down trees that were long past their best and it was extremely difficult to persuade him to take any payment for the service he provided. The most popular arrangement was to purchase climbing rope and associated equipment that would be used by the wide number of young people from diverse backgrounds, many of them with impaired sight, whom Dick would take climbing or potholing.

Dick had a vision whereby the proceeds of the sale of the house in Addiscombe Road, Croydon in which he lived with his parents would, after his death, be used to purchase a property in the Brecon Beacons with the intention that it become a centre where young people would be able to participate in the “Great Outdoors.” After several false starts, a suitable property has been identified earlier this year and the purchase is almost complete. Sadly, he will not see his dream become reality but his friends, many of them Old Mid Whitgiftians, are committed to making it happen.

Dick was different, sometimes downright difficult and always devoted to things that he believed in, no matter what others may say or think. Compromise was not on his agenda! Those who knew him well accepted him on his terms and were happy to do so.

For much of the past six years Dick had been confined to bed which he found enormously frustrating. A few trips out in a converted vehicle “The Dickmobile” relieved the boredom to a degree but eventually his health declined and he rather lost interest. Who wouldn’t?

Dick’s stepbrother Chris has been a tower of strength and has provided regular updates for those OWs and others who were able to make regular visits to Whitgift House and who, until very recently, enjoyed conversing on a range of topics, including, of course, the fate of English Rugby.

Dick’s funeral will be held on 27th November at 2:15pm at Croydon Crematorium at the larger chapel, followed by a ‘reception’ at Trinity School from 4:15pm