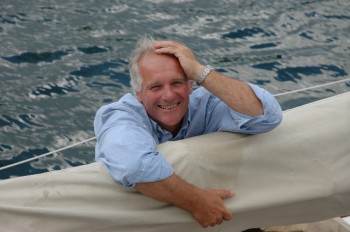 Leading yacht designer, Ed Dubois OW (1964-1971) died on 24th March, aged 63. There are many obituaries available to read online. We have reproduced a few paragraphs from some, below.

“The designer of many of the most beautiful superyachts, Ed Dubois determined on his career as a boy while sailing a little rented boat on the lake in Regent’s Park in London. He recalled the feeling of being “propelled by the wind across the water” for the first time.

He went on to become an accomplished sailor and then a noted and competitive racing yacht designer. Increasing numbers of the world’s super rich came to his studio near Lymington in Hampshire prepared to spend millions.”

Subscribers to The Times can read the rest of the article HERE.

“From Westerlys to superyachts, with plenty in between, the career of designer Ed Dubois has been spectacular.

Ed grew up in a landlocked part of England but an innate love of the sea, sailing and yacht design meant his choice of career was set from early teens.

Graduating in 1974, Ed worked for Alan Buchanan, naval architects in Jersey, for a year then left to design his first yacht, Borsalino Trois. Following the racing success of this yacht, he went on to design many winners of the major offshore racing trophies around the world.

Ed’s philosophy was to combine ultimate seaworthiness and excellent performance with imaginative space planning and beautifully proportioned, elegant lines. He sailed on many of his racing designs through the 70’s, 80’s and 90’s.

Ed was awarded an Honorary Doctorate in Design by Southampton Solent University in 2004 and was a Fellow of the Royal Institute of Naval Architects and Royal Academy of Engineering.”

The full article can be read HERE.

“Ed Dubois’s particular talent was his ability to marry excellence in naval architecture with the sort of sophisticated, architect-inspired living arrangements once thought possible only in the biggest motor yachts.  When it came to the shape of Acquel II, the initial profile that he drew with one stroke of the pen, from bow to stern, stamped the personality – svelte, sexy and slightly dangerous – of that and all other Dubois yachts to come. Its superstructure featured  a raised deck saloon, and his company developed new winches and a discreet ventilation system , resulting in a boat that was not only technically advanced but also stunning and original.

Dubois’s  ability as a designer was allied to  considerable charm,  and his  clients  often returned with new commissions.”

The full article can be read HERE.