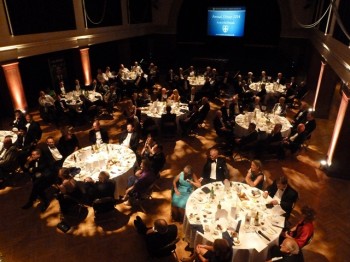 Holding this year’s WA Annual Dinner on Friday, 13th June was perhaps tempting fate, but the weather was kind and a hundred Old Whitgiftians and their partners enjoyed a splendid evening at Haling Park.  Many said how were pleased they were to have had the opportunity to see the many changes that have taken place since they last visited the School.

Drinks before dinner were held in glorious sunshine by the War Memorial, accompanied by some light music from the OW Corps of Drums, who were set up in the newly landscaped area in front of the new Boarding House – a new experience for most of those present.

Once indoors, Big School had been transformed into a dining venue which equalled and surpassed anything available to us in London – as well as having the additional and unique element of nostalgia.  Catering at Whitgift is now of the highest quality and we were served with a meal that any top chef would have been proud of.

Entertainment was provided by an outstanding school musician, Hristiyan Hristov, who played “The Art of Thangka” by Emiko Uchiyama.  Hristivan, who is fifteen years old and from Bulgaria, is a virtuosic marimba player.  Since he has been at Whitgift he has performed for the Bulgarian and Macedonian Ambassadors as well as a concert at Trinity College, Cambridge.

I had consciously aimed for a relaxed style for the evening and this was reflected very ably by our two guest speakers, Clive Doig OW and Ian Watson OW who both succeeded in keeping their postprandial audience not only awake but amused!

Considerable thanks are due to the Headmaster for allowing us to return to Haling Park for this dinner, and also for responding so ably to the toast of Floreat Domus.  His account of current events and future plans for Whitgift confirmed to the audience that the House does indeed flourish.

And also a big thank you to WA Chairman, Pip Burley, and to WA Secretary, Vicky Burley, for all the hard work they put in to making the event so successful.