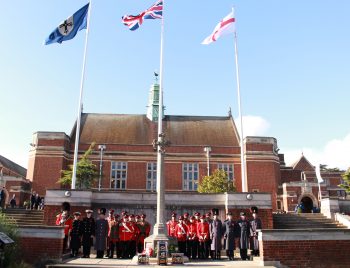 With our new, larger Association flag proudly flying above the War Memorial, the WA President Dr Richard Bateman OW (1967-74) laid our red poppy wreath on Friday 10th November at 11.00am during the traditional Remembrance Service at the School.

A large number of Old Boys were in attendance and appreciated the readings, singing and music from the boys and especially the parade of the Corps of Drums when our President commented that the last time he had participated in this Service was as the School’s Drum Major.

It is hoped for an even bigger attendance of OWs at next year’s larger Service on Friday 9th November 2018 to mark the end of WW1 hostilities which will be followed by a celebratory lunch at the School.