A Memorable Evening at the House of Lords 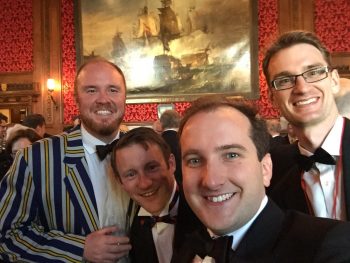 This year’s Whitgiftian Association Annual Dinner, hosted by WA President, Lord David Freud, was a splendid affair with 120 OWs of all generations in attendance. The event was held at the historic Peers’ Dining Room.

After a champagne reception in the Peers’ Guest Room, most OWs chose to gather in groups for a guided tour of the Palace of Westminster, prior to enjoying an excellent four-course dinner.

Jonathan Bunn, Chairman of the Association, welcomed everyone and made special reference to his own year group (which was well represented as they celebrated their 30th anniversary of leaving the School) and in particular, their Headmaster at the time, David Raeburn, who was attending his first WA Annual Dinner for some years. Jonathan then introduced Lord David Freud, who, as event host, went on to add his own welcome and wished everyone a thoroughly enjoyable evening. David also took the opportunity to welcome his personal guests, who included colleagues from the House of Lords and fellow OWs, Lord Peter Bowness and Lord Graham Tope. He also welcomed his special guest, Lord Michael Howard, from whom we were to hear later in the evening.

During dinner, we were privileged to be entertained by a remarkable young OW musician, the gifted violinist, Ion Mosneaga. Ion treated us to a virtuoso performance of the 1st, 2nd and 4th movements of the Ysaye Solo Sonata No2 and was rewarded by an ovation from an appreciative audience.

Presiding over the after-dinner speeches with a toast to the guests, David Freud spoke of the profound effect of his Whitgift education, saying that he could only speculate on where he would have ended up without it – almost certainly not as a member of the House of Lords! He went on to describe a whole series of amusing incidents from his days at Haling Park. 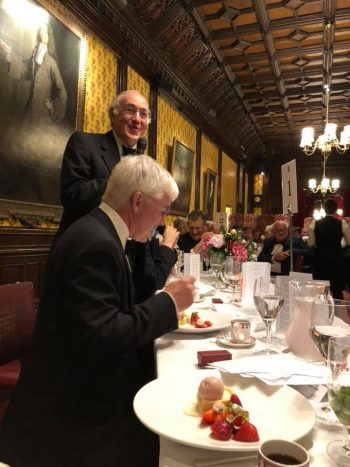 He then introduced our special guest, Lord Michael Howard, the former leader of the Conservative Party, who treated us to a brilliant speech including a number of amusing references to the late Margaret Thatcher and her remarkable attention to detail, illustrated by a number of incidents and escapades to prove the point!

Lord Howard was followed by Abbas Khan, OW, who proposed the toast Floreat Domus. A Classics student at Cambridge, Abbas emphasized his belief in the importance of a Whitgift education and shared his own amusing recollections of his time spent at School. His speech was greeted with enthusiasm as all stood to join him in his toast to the School. 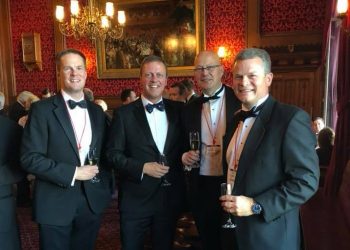 In response, Mr Chris Ramsey, who is close to concluding his first year as Headmaster of Whitgift, said (in a light-hearted reference to his predecessor’s tenure) that he had, “only another twenty-five years to go!” He went on to describe his impressions of Whitgift so far, concluding that it was an outstanding school and his firm intention was that it should remain so. He praised the work of the WA and expressed his appreciation to those individuals responsible for arranging the dinner and the many other tasks the WA undertakes.

The President thanked the Headmaster for attending and hoped he would be able to attend many more WA dinners in the future.

The formalities were rounded off with a hearty rendition of the school song “Carmen” after which the company dissembled into the night.

A truly memorable evening thanks to our President, the staff of the House of Lords and to all those who contributed to the event’s success.