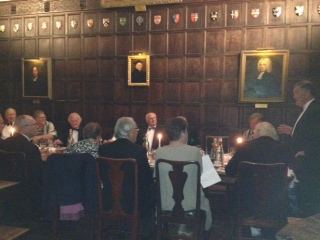 The bi-annual Oxford Dinner was held this year on 2nd October at Jesus College, Oxford University.

We began with pre-dinner drinks in the very beautiful setting of the Harper Room with its handsome panelling (and no steps!), ideal to get us off to a sociable start.

Dinner was then served in Hall with all in attendance seated at High Table, under the gaze of Queen Elizabeth, engendering a magical, intimate atmosphere. The food was excellent and widely applauded (the curly kale was a welcome “first” for me), served smoothly and elegantly throughout.

The highlight, however, was undoubtedly past Headmaster David Raeburn’s thoughtful speech. Although really it felt more like an intimate, donnish chat. He began with reference to Peter Cox’s book, “Memories of Whitgift”, to introduce his perception of Whitgift in transition, moving onto his personal educational philosophy. Everyone was totally attentive, and appreciative. I’m sure he relished it too.

As the company became increasingly mellow, various attendees took turns to pipe up. WA Chairman, Pip Burley, led a chorus of Carmen and Professor Paul Wordsworth volunteered to organise the next dinner; his idea being at Green Templeton which would allow an in-term event, which we would hope might appeal to OWs currently studying at Oxford.

After prompting by WA President David Stranack, we repaired to the King’s Arms, where the mellow atmosphere continued.

It was altogether a memorable evening, which was followed by widespread enthusiasm for another Oxford Dinner soon! Thanks to Alistair Lack for his help organising.