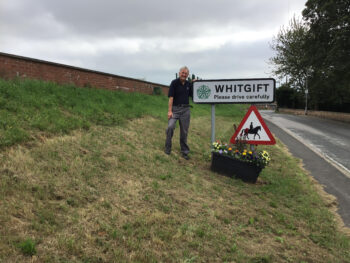 To Col Mike Cornwell OBE, OW (1984-92) and Col Matt Birch OW (1987-92) who are both promoted to Brigadier and to Sir Keith Lindblom on his appointment as Senior President of Tribunals.

Full marks to JB Gill OW (1998-2005) late of JLS and now a farmer who has become an ambassador for the litter campaign “Don’t Trash Our Future” to crack down on rubbish dumpers and increase the fines available to the local authorities.

At least one member is still enjoying his Whitgift Rose some 20 years on from its special commissioning to celebrate the Quatercentenary of the School in 2000, anyone else I wonder?

In a rare escape from Croydon, the WA President was recently able to fulfil a long-held ambition to visit the village of Whitgift near Grimsby in Yorkshire. The visit to “Home” turned out to be a small collection of cottages on the South bank of the River Ouse but did include the church of St Mary Magdalene a grade 1 listed building dating from 1304, which boasts an extraordinary clock.

Installed in 1919 to mark the end of  WW1 it carried the motto In Terra Pax – Peace on Earth but more interestingly the clockface showed X111 at the top instead of the usual X11.The local explanations of a drunk signwriter and one extra for the Devil, neither of which seemed fair on our Founder!!