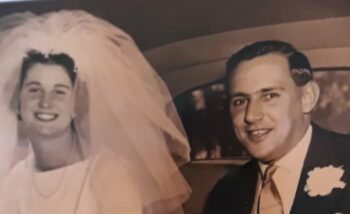 Many congratulations to Anne and Raman Subba Row, OW (1943-50), on the celebration of their diamond wedding anniversary which had to be marked at home due the current lockdown, sixty years on from that special day at the Savoy Chapel.

I hear that whilst our most capped rugby club prop forward was out on his bicycle taming the Boxhill Olympic zigzag, he was tackled by a motorcar which unfortunately was not fooled by his best match-day side step. However, I understand he is recovering well and is now out of hospital and at home under rehab instructions.

Unfortunately we have recently lost our oldest member at the grand age of 102,however we congratulate Ronald Branton, OW (1930-38), on reaching his centenary in April and he was happy to chat about his junior days in the ‘dumbbell’ School buildings of North End when I presented him with an OW striped scarf ready for his hoped for return visit to the OWVRC back at the School Range.

Finally, commiserations to Rory Burns, OW (2001-06), who was on the losing side in the recent episode of BBC’s Question of Sport although he did answer his home cricket question correctly!