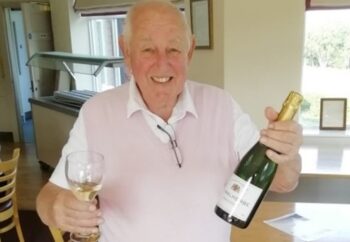 Our last outing of the season, as it turned out, was at Royal Ashdown on a very pleasant September day. 26 members and guests turned up to play for the Autumn Cup, on Ashdown’s West course, which measures a meagre 5,559 yards off the white tees and has no sand bunkers, but provides a true test of golfing accuracy featuring, as it does, tight fairways and the odd water hazard!

This showed up generally in the results, with 33 points ultimately proving a winning score. Peter Blok, a familiar figure in the winners’ enclosure, squeezed home on the second countback (being the scores over the last six holes) from Nigel Bradley, with Pip Burley taking third place, on countback from two others, with a score of 32.

The club did us proud, as they always do, providing splendid facilities at a very reasonable price, and they certainly took first prize on social distancing, serving us lunch in twos, seated at either end of long refectory tables. Pass the loudhailer!

Although not amongst the prizewinners, Mike Wilkinson had the distinction of a hole-in-one on Ashdown’s 156 yard 9th hole. Mike described it afterwards as ‘a shot in a million’, being one shot amongst the million others he took during the round! However, his playing partners attested that this was no fluke; they all witnessed its flawless path on to the green and into the hole.

This was only the ninth recorded hole-in-one during a society event, in its 100+ year history, so congratulations, Mike, and many thanks from all of us for the celebratory drink. Mike is shown the picture below, suitably in possession of a bottle of champagne.

So that is it, pretty much, for the current year, a year full of promise but marred by Covid and the consequent cancellations of many of our normal events.

The Grafton Morrish, the last of the scratch tournaments entered by the school, and normally played in early October, was cancelled, much to the disappointment of Matt Webster, who had pulled together a potentially strong team.

It is regrettable to report also that the society’s autumn tour met the same fate. Things had looked touch-and-go as the Covid statistics in the South Wales region, and nationally, got worse as September progressed, and the coup de grace came at the end of the month when a local lockdown was enforced in the Swansea area.

Nonetheless, the 2021 tour is provisionally booked for the same locality, and of course everyone will be hoping the current situation is but a distant memory by then. On that basis, 2021 will witness several postponed events, including the society’s centenary celebration, deferred from June.

The society’s individual knockout tournament is however being pursued, albeit with a later timetable than usual. Mark Chatham will play either John Butler or Alan Blok in one semi-final, and Jeremy Stanyard will face either Ian Chicken or Guy Mackey in the other. To be concluded!

New members, from any OW generation, and including staff and parents, are very welcome to join the society, and should contact peterbgale@sky.com to express their interest.