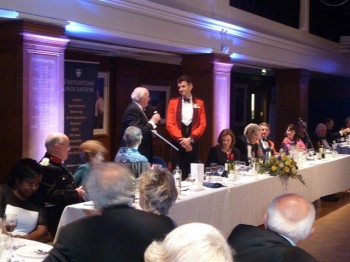 The Inaugural Achievement Award Dinner, held on Saturday 29th March at Whitgift School, in honour of OW Lt Col James Coates was a resounding success. Thank you to all OWs who attended and gave generously to Lt Col James Coates’ chosen charity, The Afghanistan Trust.

Lt Col Coates commanded the 3rd Parachute Regiment in the northern Nad-e Ali region of Helmand Province during 2010-2012, where he implemented a new counterinsurgency strategy, known as “Precision Strike”.  The strategy successfully dismantled local insurgent networks by combining high-level intelligence, the latest surveillance technology and the use of precision missile attacks to target Taliban command with minimal civilian casualties. As a result, Nad-e Ali was handed over to the Afghans in August 2013.

Responding to the presentation of the Award by David Stranack, President of the Whitgiftian Association, Lt Col Coates said: “I owe so much to Whitgift for shaping me and providing the opportunities that led me to where I am today. I feel honoured to be here again. It’s great for me to be able to set 3 PARA’s last tour in Afghanistan into context and to highlight the extraordinary work of our soldiers as combat operations draw to a close this year. The tours were team efforts and I shall never forget the courage, commitment and deep professionalism of everyone involved.”

Lt Coates’ strategy attracted the attention of US General David Petraeus, Commander of ISAF (International Security Assistance Force) and US Forces in Afghanistan, who said that James’ tactics were “a most impressive way to do business”.

Lt Col Coates was awarded the OBE in 2011. His citation read, “He set the benchmark across the whole of ISAF in Afghanistan as the exemplar in exploiting the emerging surveillance technology”.

Lt Col Coates attended Whitgift from 1981-87 and since returning to the UK, has been a regular visitor to the School and a great supporter of the School’s Combined Cadet Force.

The evening raised £3,000 for the Afghanistan Trust, a charity that helps re-build the lives of soldiers who return from Afghanistan having sustained serious injuries.

Please browse the gallery below for photos of the event.