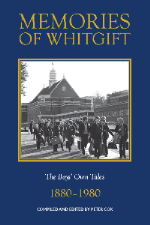 Do you remember Mr Marlar’s tree branch injury? Prompted by the account of the event in Memories of Whitgift, eyewitness, Graham Nowers, has kindly cast a light on the event:

(b) It was a windy and stormy afternoon and we were, as normal, standing on the left hand side of the pitch, around the half-way line

(c) It started to rain and we all moved back to get some shelter from the large trees that were either to the right of, or overhanging the path/track that leads to the Fives Courts and Bagbie House

(d) I heard a loud crack from above my head, and to my left hand side

(e) I looked up over my left shoulder and saw a large branch falling from the top of a tree. When I say it was large, I remember it as a dead branch, only about 4 or 5 feet long, but substantial and with a diameter of about 5 inches. It was as if it was the dead remnant of a branch that had been broken off long before.

(f) Anyway, down it came and landed a few yards from me.

(g) I was not aware that he was anywhere near to me, but to my horror, the next thing I saw was Mr. Marlar lying unconscious on his back, the branch having apparently landed on his head.

(h) I have no clear recollection of what happened after that – obviously senior people took over and I believe Mr Marlar was taken to Hospital by ambulance.

(i) Be in no doubt, though, he was knocked unconscious and it was a very nasty incident.

I do hope this might be of interest and use to you as another piece in the Whitgift jigsaw that you are evidently so painstakingly completing.”

Very many thanks to Mr Nowers for getting in touch. If you haven’t yet received your copy of Memories of Whitgift, you can order it online now. Still not sure? Read excerpts of every chapter here.

On the same incident, OW Dick Wallis RN (rtd.) (1947-54) writes, “Thank you for sending me “Memories of Whitgift”, which certainly rang many bells, despite the passage of time. For the record, I vividly remember the heavy branch falling on Mr. Marlar, as I was standing just a few feet away, watching the rugger on Big Side (never good enough to play for the First XV). I recall the great concern amongst all those present that this misfortune on a very windy day could be fatal and of course our Headmaster was away recuperating over a long period. Later on, I was even more lucky to have what I can only describe as a miraculous escape, during experimental deep-diving in the RN – but that’s another story! Best Regards from a “lucky” OW!”