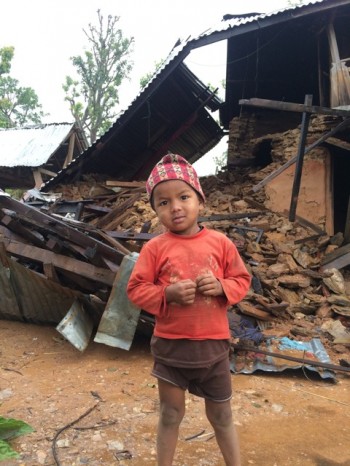 When the dust settled, 2.4 million people had become instantly homeless. 32,000 classrooms were destroyed – and nearly one million Nepali school children lost both their homes and their schools.  Life, in one of the world’s poorest countries, just got tougher.

For 5 years, Learning Planet has been working with remote rural communities in Gorkha district to bring clean energy and water, IT and communications infrastructure, teacher training, and new school buildings. We were working in Dhawa VDC, Gorkha, when the earthquake struck. Just 12 miles from the epicenter, destruction was near total.

Already on the ground, we were able to respond very quickly. With our longtime local partners, Abari, and 25 amazing volunteers, we distributed hundreds of blankets, mattresses, and tarpaulins, landing most by helicopter until we were able to clear the road. Miraculously, we lost only one soul in Dhawa, despite pulling more than 50 people from rubble. The earthquake had occurred at midday on a Saturday – and almost everyone was outside tending to their fields. But thousands were left homeless. Logistics and resources were challenged almost immediately with the sheer scale of the disaster.

Dhawa was just one of hundreds of villages in the same position. We sent our workers home to their own villages to help their own families, promising to bring aid at the earliest possibility. As the larger international relief agencies began to arrive in the nearest towns, a week after the earthquake, every city in Nepal ran out of tarpualins, and hundreds of tons of international supplies became stuck in the chaotic international airport. When we finally reached our workers’ remote villages (on foot) some 13 days after the quake, with hundreds of sheets of tin and a truck full of tools, fixings and blankets, no other assistance had yet arrived.

With monsoon imminent, and so many homeless, we hatched a plan with our partners. Together we designed a re-useable transitional shelter that anyone could build, with materials people already had available to them. We produced and disseminated a simple manual for ways to construct such a shelter – with salvaged wood, stone and tin from their destroyed homes, plus bamboo, earth and grass. For us, the key was owner-led reconstruction; we had to arm people with the tools or knowledge to quickly get themselves under cover.

Two weeks on and thousands of households began to go hungry – their yearly stores of rice and corn, lost. Buried in rubble and then ruined by rain, hundreds of families in every affected village, had been left completely without food. As help from neighbours and friends began to dry up, we lobbied the World Food Programme to assist. But there were too many affected.

Thanks to the OW appeal, we were able to buy some time. We dispatched 21 tons of rice in seven trucks to provide immediate assistance to all 968 homes in Dhawa. Hundreds of other individuals and small organizations chose a similar path in places that they were able – in a wonderful display of human kindness the like of which I’ve never seen. Although massively over stretched, The World Food Programme since picked up the pace in Gorkha. And some world-leading  NGOs – notably Save the Children and People in Need – began their sophisticated operations.

With great relief, we were able to re-focus on our strengths, and ponder the next problem – how to get thousands of children back to school in less than a fortnight. With our partners we designed an inexpensive, high-quality, safe and sturdy transitional structure that could be a classroom or health post – deployed very quickly, with just bamboo, canvas and rope. And we developed a simple instruction manual, so that they could be built by anyone, throughout the country.

In collaboration with Tents to Nepal, we brought truck loads of high quality canvas from India for distribution across five districts. With this canvas and our manual, and with assistance from the OW appeal, 94 safe, weatherproof, temporary classrooms were constructed and thousands of traumatised kids got a little normality back. Before the Monsoon came, Dhawa’s 1,300 school children, and those in nearly 20 other villages were all in class.

Since the rains have arrived, our focus has shifted again. With 494 schools destroyed in Gorkha alone, some serious ideas are now needed for permanent classrooms in huge numbers. We’ve developed a modular school design that can be adapted for use across all 24 affected districts. The plan uses local, sustainable materials to create inspiring, inexpensive, seismically safe classrooms, that are flexible, communal, affordable and fun.

While our partners now train hundreds of local builders to use simple new techniques, we aim to develop local capacity across a huge number of affected communities. Our aim is to replace ineffective concrete school blocks with an inspiring child-friendly model that beats the old standard in durability, seismic protection, thermal efficiency, sustainability and flexibility; which goes up faster, costs less, and is much more fun to be in. Faced with the scale of destruction, bold solutions are needed.

We believe that communities armed with the right tools, information, and support can recover themselves, and build shelters, homes, health posts and classrooms in great numbers. Out of disaster comes renewal – and Nepal and her resilient and imaginative people now have a once in a century opportunity to take a giant leap.

We’re hugely grateful to OWs for giving us the opportunity to work with communities in Nepal who are already taking small steps towards that leap. With your help we were able to provide 1st line assistance to thousands of villagers in remote and isolated communities in Gorkha and beyond.

If you’d like to know more, donate to our “Build Back Better” Nepal Schools appeal, or get involved in any capacity, please visit our website www.learningplanet.org.uk.

If you would prefer to donate by bank transfer, the details are:-

The OW Nepal Earthquake Appeal raised more than £7,400 in May 2015. A special thank you to Nigel Bowthorpe (OW 1982-89), and the WA office for co-ordinating the appeal, and to Saj Khan (OW 1982-1989), for helping an old school friend he’d not seen in two decades, and raising a third of the total single-handed.